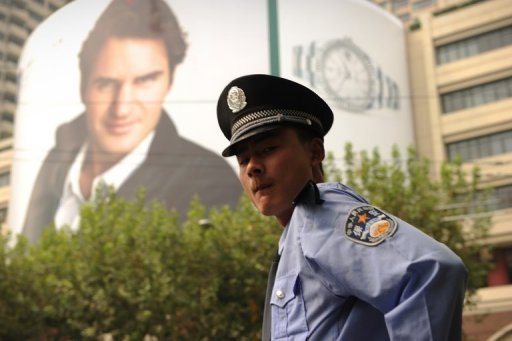 A tournament official made the assurances after an unknown blogger threatened to assassinate the Swiss player, who will headline the tournament starting on Sunday.

“We are fully aware of the comments that have been made and we take all such issues seriously,” the official said in a statement sent to AFP.

“The Shanghai Rolex Masters has security in place for our players and every precaution is taken to make sure players are kept safe and comfortable,” said the official.

The security alert was raised after hate messages from the blogger, who calls himself ‘Blue Cat Polytheistic Religion Founder 07’ appeared on the popular baidu.com site.

“On October 6, I plan to assassinate Federer for the purpose of tennis extermination,” read the threat.

The user also posted a doctored image showing a decapitated Federer on his knees on a tennis court, with an axe-wielding executioner standing next to him.

Police and other government agencies have been contacted to increase security around Federer, an official with the tournament’s organising committee told the Shanghai Youth Daily.

“We hope that it was a verbal threat only, and the fan won’t take substantive action. However, we have to take it seriously,” Yang Yibin was quoted as saying.

Attacks on tennis players are rare, but in 1993 Monica Seles was stabbed by a fan during a match in Hamburg.