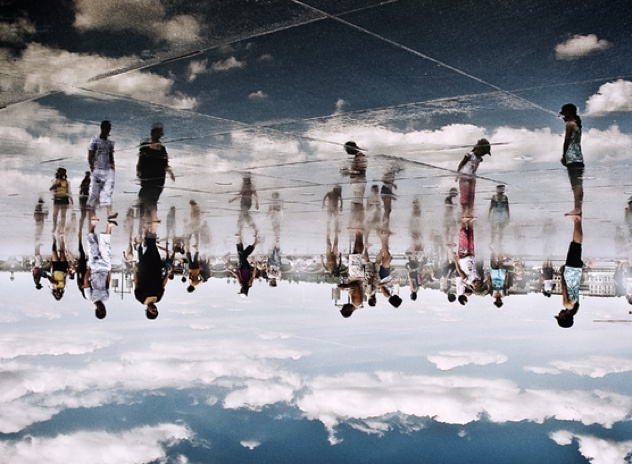 When we look at the world around us, we must remember that the veil of human perception means things are not always what they seem. When you glance at an object, the image received actually appears inverted on the retina. Our eyes in fact see everything upside down, but incredibly, our brain compensates by default, allowing us to perceive the world right-side up.

The brain’s ability to be misled in this regard presents an eerie insight into the potential for manipulation of human experience. In a series of experiments, volunteers wore lenses to turn the world upside down. This reversal caused the brain of the subjects to stop compensating for the retinal inversion in order to see upright. When the lenses were removed, the participants saw upside down for a time.

It is true that the images formed on your retina are upside-down. It is also true that most people have two eyes, and therefore two retinas. Why, then, don’t you see two distinct images? For the same reason that you don’t see everything upside-down. One of our most remarkable tools – the brain – is hard at work for us at this task.

Processing visual information is a complex task – it takes up a relatively large portion of the brain compared to other senses. This is because your brain performs several tasks to make images ‘easier’ to see. One, of course, is combining the two images, which is helped by the corpus callosum, the tiny part of your brain which joins the two big hemispheres.

The other part is handled in the optic part of your brain itself, and part of its job is to make images right-side-up. It does this because your brain is so USED to seeing things upside-down that it eventually adjusts to it. After all, it’s a lot easier to flip the image over than it is to try and coordinate your hands and legs with an upside-down world! As a result, though, it is believed that for the first few days, babies see everything upside-down. This is because they have not become used to vision.

Your brain CAN be retrained though. In one psychological study, participants were asked to wear inverting lenses – lenses that invert the image BEFORE they get to your eye so that when your eye inverts it, it’s right-side-up. At first, everything appeared upside-down to the participants.

But, after a few days, people began to report that everything appeared right-side-up! As a second part of the study, the people were asked to take the glasses off. Because they were now used to the lenses, their NORMAL vision appeared upside-down!! Within a day, though, their vision returned to normal. The reason you don’t see everything upside-down, then, is simply because it’s easier to think about right-side-up!