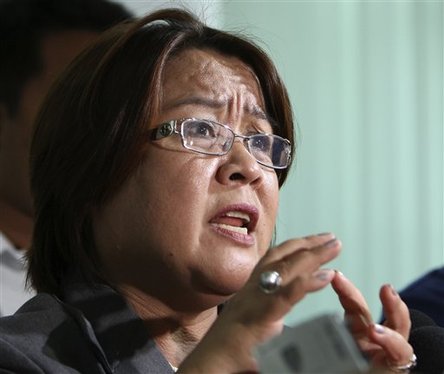 The Judicial and Bar Council as of Wednesday has already received seven oppositions against De Lima.

Some of these letters came from a certain Jericho Urquiola and another from Marie Gargolez of Iloilo City, lawyers Frumencio Pulgar and Arturo De Castro, Paul Camillion, Dr. Oscar Noble and one of the lawyers of former Chief Justice Renato Corona during the impeachment trial Atty. Rico Quicho.

Gargolez and Urquiola also stressed on her pending disbarment case before the Integrated Bar of the Philippines and defying a temporary restraining order issued by the Supreme Court.

Quicho, on the other hand, said “we cannot cherry-pick our morality. The same lofty legal and moral standards that were applied in unseating a Chief Justice should likewise be bases in naming a new one. That, or irreversibly erode the faith and confidence of our countrymen–the bedrock of credibility and respectability upon which stands any and all democratic institutions–in the Judiciary.”

“I filed my opposition against the nomination of Justice Secretary Leila de Lima for Chief Justice…I took the first formal step in doing away with the BS, the “Bantay-Salakay,” that have, seemingly by design, found their away in the selection process for the next Chief Justice,” Quicho said.