Omar Khadr has been returned to Canada and is being held at a maximum-security prison in eastern Ontario, after spending a decade at a U.S.-run detention camp in Guantanamo Bay, Cuba.

Public Safety Minister Vic Toews said Khadr, 26, left the U.S. naval base at Guantanamo early Saturday and arrived at Canadian Forces Base Trenton before being transferred to the Millhaven Institution in Bath, Ont., to serve the balance of his sentence for war crimes.

“Omar Khadr is a known supporter of the al-Qaeda terrorist network and a convicted terrorist,” Toews said.

“I am satisfied the Correctional Service of Canada can administer Omar Khadr’s sentence in a manner which recognizes the serious nature of the crimes that he has committed and ensure the safety of Canadians is protected during incarceration.

“Any decisions related to his future will be determined by the independent Parole Board of Canada in accordance with Canadian law,” Toews said.

Miami Herald reporter Carol Rosenberg told CBC News “it had become clear the repatriation was about to happen.”

Rosenberg said Khadr recently got a consular “welfare” visit from a Canadian diplomatic official in advance of his return.

Under a plea deal with prosecutors in October 2010, Khadr admitted to being responsible for the death of American Sgt. 1st Class Christopher Speer.

In exchange for that plea, he was promised he would be transferred to Canada to serve out the rest of his sentence.

He agreed to a sentence of eight years, with no credit for time served, with the first year spent in U.S. custody.

The U.S. defence department issued a statement Saturday referring to the five war crimes to which Khadr pleaded guilty before a military commission: 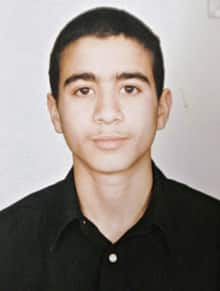 Omar Khadr, appearing younger in this undated family photo, can apply for parole next year.

NDP foreign affairs critic Paul Dewar said an agreement with the Americans to transfer Khadr to a Canadian prison was reached a year ago, but “the Conservatives dragged their feet on it,” until now.

“There was a lot of pressure from the Americans for us to actually do our job and take care of our business and have one of our citizens return home.

“We were the only [Western] country who had a citizen, a national, left in Guantanamo Bay and this has been ongoing for years. It was inevitable that he would come home,” Dewar said.

Now that he’s at Millhaven, he can apply for parole next year under Canadian law.

Khadr was 15 when he was found badly injured in the rubble of a bombed-out compound near Khost, Afghanistan. He was transferred to Guantanamo Bay a few months later, accused of throwing the grenade that killed Speer.

“I am very satisfied, even if [the repatriation] is done in the dead of night and on a weekend to avoid media attention,” said Senator Romeo Dallaire, who recently wrote a book about the use of child soldiers.

Khadr was the youngest and last Western detainee to be released from the naval base, which opened in January 2002.

“Because he was a child soldier, Canada would have an obligation to provide rehabilitation and counselling to him under international. law,” constitutional and human rights lawyer Paul Champ said.

Toews said, however, he has concerns as to whether the parole board can “effectively administer” Khadr’s sentence.

The minister said Khadr “idealizes his father” and appears to deny Ahmed Khadr’s “lengthy history of terrorist action and association with al-Qaeda.

Khadr was born in Toronto but spent much of his childhood in Pakistan and Afghanistan. A year after his capture, his al-Qaeda financier father was killed in a military ambush in Pakistan.

Brands to benefit from generating leads in a brand safe environment