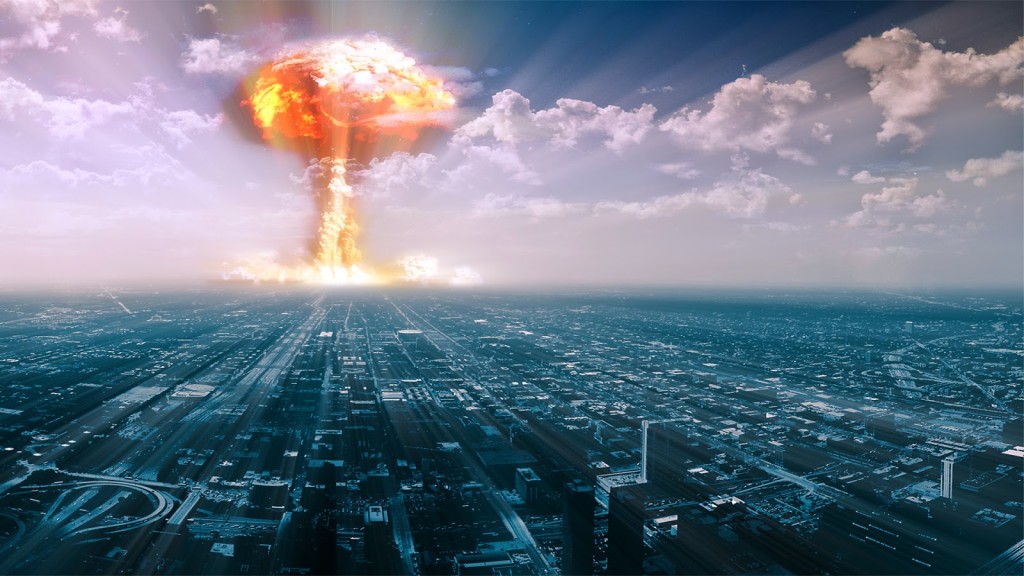 Nuclear weapon security is usually handled by different agencies from those that manage civilian safety mainly to maintain secrecy.

The ultimate security threat is thought to be from terrorist groups, but the number of times breaches in nuclear security transpired is simply staggering.

Eight countries are declared nuclear powers in the world , of these five have signed the Non- Proliferation treaty.
These countries are the US, UK, Russia, France and China, non signatories are Pakistan, India and North Korea.

It would not be wrong to say that the US has the longest track record of security lapses and troubles in its nuclear forces.
There have been key mis-steps by personnel who handle the world’s most deadly weapons.

Court-martial rates in the nuclear missile force in 2011 and 2012 were more than twice as high as in the overall Air Force.
The Air Force removed Maj. Gen. Michael Carey from 20th Air Force command which is responsible for the entire Minuteman 3 missile force.

34 nuclear missile launch officers were involved in a cheating scandal and stripped of certification, largest such breach of integrity in the nuclear force.

Nine mid-level nuclear commanders were fired and a colonel resigned. Cheating in the monthly test on operating missiles began as early as November 2011 and continued until November 2013.

On 29 August 2007 US airmen accidentally attached six nuclear warheads to their plane, mistaking them for unarmed cruise missiles intended for a weapons graveyard.
They were then flown across the US and remained lost for 36 hours.

US Defense Secretary Chuck Hagel ordered immediate actions for full review of the nuclear force. U.S. nuclear security record often reports security lapses in custody of nuclear weapons themselves. It is truly incomprehensible how US nuclear arrangements can be considered safe after all these incidents.
A group of anti-nuclear activists worked their way undetected through four security fences at the Y-12 National Security Complex in Oak Ridge, Tenn., in July, 2012.

Y-12 historically had been considered the “Fort Knox” of the American nuclear security complex. If a group of peace activists could make it that close, what could a group of well-armed terrorists accomplish?

So serious was the breach that officials at the Nuclear Regulatory Commission, which oversees civilian nuclear sites, traveled to Oak Ridge to study what happened.

There is room for other kinds of lapses as well, classified design drawings used for manufacturing nuclear weapons have not been efficiently maintained by nuclear weapons labs under the NNSA as disclosed in a report by the US Department of Energy.
Nuclear weapons information has not been maintained as a priority and this could have significant effects on safety and surveillance.

The National Nuclear Security Administration seems to be in a crisis. Recently, a sensitive list of US nuclear sites was mistakenly posted on the internet.

In 1999, there was a story in the news that China had built and tested small bombs similar to American ones in a major breakthrough after American nuclear secrets were stolen from Los Alamos National Laboratory in New Mexico. This is a very alarming track record of safety lapses.

Hundreds of Russian nukes went missing after the USSR disintegrated, there are no records available, there is chance of misuse if they ever fall in the wrong hands. Nowadays, Russia is building fast-breeder reactors and floating nukes, both are potential risks according to nuclear safety standards.

Russia intends to build roughly 40 new reactors at home, and it expects as many as 80 orders from other countries by 2030, facilities are included that would generate power and desalinate water, of particular interest in the Middle East.

Many nuclear experts are concerned that Russia is galloping ahead without security precautions, they also feel that Rosatom is too willing to do business with any nation, which could lead to excessive proliferation of nuclear material or know-how.

Experts also worry that Russia’s nuclear leaders do not place a top priority on safety, the government owns and funds both the designer and the independent safety review. What is truly alarming is Russia’s desire to mass-produce mini reactors that can float, the first floating plant, the Akademik Lomonosov, is scheduled to begin operating in 2016.

The idea is to have easily maneuverable 35-MW reactors that are towable to difficult-to-access regions or energy-intensive ventures such as desalination plants, with cables running to land to distribute power. Floating nukes have a high potential for contaminating entire marine food chains. Floating nuclear reactors are also a security risk when it comes to terrorists.
Rosotom’s passive safety systems are built into India’s Kudankulam reactors, Indian nuclear safety is not very enviable either.

India’s nuclear safety controls are “fraught with grave risks”, says an Indian parliamentary committee report. The nuclear regulatory authority is weak, under-resourced and “slow in adopting international benchmarks and good practices in the areas of nuclear and radiation operation”.

The overall performance is dismal, slow to adopt international standards for nuclear safety and have not accepted the need for a peer review by the International Atomic Energy Agency.
The AERB, which supervises safety issues at India’s 22 running nuclear plants, has no power to make rules, enforce compliance or impose penalty in cases of nuclear safety oversight. It can impose a fine of maximum Rs 500 as a deterrent, and that is all.

It has no direct role in radiological surveillance of nuclear power plants to ensure the safety of workers or in emergency-preparedness. It has no formal safety policy and dozens of safety manuals it was supposed to prepare in 1983 are not complete.

A serious lapse in safety could slow the growth of nuclear power in India, the radiation poisoning caused by Cobalt 60 at Mayapuri in New Delhi is just one incident.

India’s nuclear industry has many continuing and unresolved safety and security problems. In 2012 the Indian Auditor General released a damning report warning of ‘a Fukushima or Chernobyl-like disaster if the nuclear safety issue is not addressed.’

M V Ramana in his book ‘The Power of Promise: Examining Nuclear Energy in India’ says that some nuclear projects in India have come close to “disaster.”

The fact that there is no clear record on accidents or potential disasters at India’s nuclear power plants raises important questions about the transparency of information on the issue.
The lack of transparency makes India, s nuclear assets even more dangerous for the world.

India is not a signatory to the Nuclear Non-Proliferation Treaty (NPT) and is not subject to any inspection by the IAEA.

Once, a fire left two people dead at India’s main nuclear research laboratory, the Bhabha Atomic Research Centre (BARC) in Mumbai. The Times of India reported on November 30, 2009, that radiation contamination occured at the Kaiga nuclear plant in Karnataka.

Top nuclear scientist L. Mahalingam, who had access to sensitive information, disappeared and was later found dead. There is news about two to three tons of heavy water having leaked out of an atomic reactor in western India on August 5, 1981.

An examination of the safety record in India’s nuclear facilities reveals poor practices and routine accidents, ranging from leaks of oil to complete loss of power in a reactor causing all safety systems to be disabled. According to Greenpeace, almost 16 nuclear safety breaches have happened in India during the last 20 years.

The French government disclosed that unidentified drones had breached restricted airspace over 13 of France’s 19 nuclear power plants between early October and late November, 2014.
The drones were sophisticated civilian devices and the intrusions were seemingly coordinated.

The flights over French facilities exposed their nuclear plants’ lack of adequate defenses against drones. The French government put in place ‘all means necessary to protect nuclear installations’.

Western intelligence services, including MI5 and MI6, have up till now successfully blocked 16 attempts to smuggle plutonium or uranium, according to reports. In all cases the materials were believed to be destined for terrorist groups.

A whistleblower, William McNeilly, has exposed horrid security lapses in UK’s trident nuclear program in May, 2015. He highlighted in detail, many security lapses and technical faults with Trident missiles carrier that expose the UK nuclear deterrent to potential terrorist attacks that “would kill our people and destroy our land.” Possible attackers have “the perfect opportunity to send nuclear warheads crashing down on the UK,” he claimed.

The IAEA stresses the need for independence for regulatory bodies such as those in Australia, Canada, France, Pakistan and the US.

India needs to bring its nuclear control agency AERB on par with those of other nuclear powers in order to lessen its nuclear safety risks.

In contrast the odds of security breakdowns in Pakistan are very low if the current realities of security are assessed. Pakistani military strategy is to deny outsiders opportunities to gain illicit access to nuclear weapons.

Materials processing and weapons production facilities are at sites under strict government control , nuclear material is stored apart from the weapons themselves.

Warheads are stored separately from delivery systems , equipped with permissive action links (PALs), which require the entry of a code in the lock device before the weapon can explode.
There is a two-man rule to authenticate the codes that call for the release of the weapons. These authentication processes are standard in advanced nuclear-weapon states.

Strict secrecy is maintained about the location of storage sites and transportation and deployment of weapons is clandestine, not in convoys that have visible security.

There is less visible sign of movement and theft or attack chances are greatly reduced in transit which is usually the most vulnerable area.

The IAEA chief expressed confidence in the safety of Pakistan,s nuclear assets while visiting the Chashma nuclear plant in March 2014. Pakistan’s civil nuclear program is run under the rules and regulations of IAEA.

Pakistan did more since 2012 to increase protection of its atomic-bomb fuel than any other nuclear-armed country , a US study released this year on worldwide nuclear material security described Pakistan as the ‘most improved’ country among nine nuclear-armed states, securing its nuclear materials much better than India.

Then there is the Nuclear Security Action Plan prepared by Pakistan’s Nuclear Regulatory Authority.
PNRA is Pakistan’s nuclear watchdog working in collaboration with the International Atomic Energy Agency . IAEA has declared NSAP a model for other nations. International Atomic Energy Agency (IAEA) declared the nuclear program of Pakistan as safe and secure and appreciated the obvious dedication to the safety and security of the regulators as well of operators.

The National Security Action Plan is in place to strengthen nuclear security since 2006, it covers Management of Radioactive Sources; Nuclear Security Emergency Co-ordination Center (NuSECC);Locating and Securing Orphan Radioactive Sources.
Pakistan is the 10th largest contributor to the Nuclear Security Fund, contributing $1.16 million. IAEA has worked with Pakistan to provide detection instruments; staff from Pakistan Nuclear Regulatory Authority (PNRA) have received “on the job training” with IAEA; security has improved at a number of facilities in Pakistan using radioactive sources.

Pakistan has also established a Centre of Excellence offering intense specialized courses in nuclear security, physical protection and personnel reliability. ‘We are ready to share our best practices and training facilities with other interested states in the region and beyond.’ said the Pakistani Prime Minister at the Nuclear Security Summit at the Hague.

We anticipate that Pakistan will continue development of new delivery systems, including cruise missiles and close-range ‘battlefield’ nuclear weapons to augment its existing ballistic missiles,” he said, appearing before the House Armed Services Committee.

Pakistan’s nuclear command and control system remains one of the most sophisticated and secure in the world.

Note:  Al-Rasub is not responsible for writer personal opinion, facts and figures.