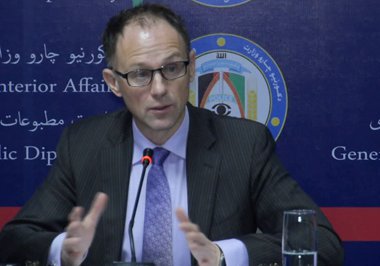 NATO senior civilian representative spokesman in Afghanistan, Christopher Chambers, stressed that there is no need for continued combat mission of the alliance in the country.

In a joint press conference with the spokesman of Ministry of Interior (MoI) on Tuesday, Chambers declared that NATO would no longer take part in the combat mission even if demanded by the Afghan officials.

“Indeed a non-combat mission and we do not see the need to become involved again in combat in Afghanistan,” Chambers said.

In addition, the NATO official noted that the Afghan National Security Forces (ANSF) is now capable to ensure their country’s security.

He expressed that the additional 1,000 U.S. soldiers in the batch of 9,800 troops staying in Afghanistan has no link to the ability of the ANSF.

But MoI spokesman Sediq Sediqqi stressed the need for fighting terrorism across the border, believing that the real hubs of terrorism are in Pakistan.

“Without a doubt the insurgents are still threatening the stability of Afghanistan,” Sediqqi said. “There is still a need to eliminate the bases of the Taliban and Haqqani Networks located in Pakistan’s northern and southern Waziristan. These were the issues that were mentioned in the security agreement between Washington and Kabul.”

He added that the National Security Council (NSC) is working to determine the future role of U.S. soldiers in accordance to the situation and the security pacts.

During the press conference, Sediqqi reported of high security threats in six provinces of the country; however, denied mentioning the provinces.

This comes as the Afghan forces are expected to assume nationwide security responsibly after the withdrawal of NATO troops by the end of 2014. However, only a small number of NATO and U.S. soldiers will remain in the country

to lead what is called the Resolute Support Mission aimed at assisting, advising and training the ANSF.