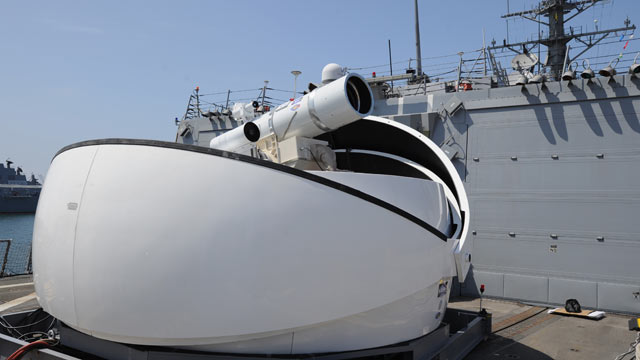 One if by land … lasers if by sea.

A futuristic laser mounted on a speeding cruiser successfully blasted a bobbing, weaving boat from the waters of the Pacific Ocean — the first test at sea of such a gun and a fresh milestone in the Navy’s quest to reoutfit the fleet with a host of laser weapons, the Navy announced Friday.

“We were able to have a destructive effect on a high-speed cruising target,” chief of Naval research Rear Adm. Nevin Carr told FoxNews.com.

The test occurred Wednesday near San Nicholas Island, off the coast of Central California in the Pacific Ocean test range, from a laser gun mounted onto the deck of the Navy’s self-defense test ship, former USS Paul Foster. see more