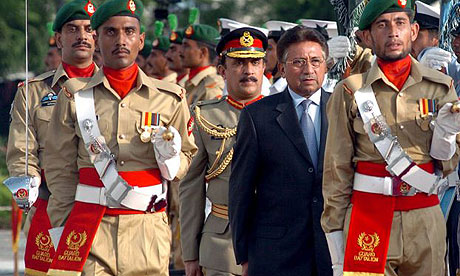 As the government and military were part of the deal that led to the resignation of former President Pervez Musharraf and his subsequent departure from Pakistan, Federal Investigation Agency’s (FIA) move to seek his trial in absentia in Benazir murder case is being seen as a political gimmick.

Critics point out that since the international powers had facilitated the deal, the Interpol is not issuing the red warrants, causing the delay in his trial.

Besides, some people are also not ready to believe that the FIA officials had fulfilled all the formalities to get the red warrants for Musharraf issued.

According to the sources, under Sub-section 10 of Section 19 of the Anti-Terrorism Act (ATA) 1997, the prosecution agency can request the court to try a fugitive in his absence.

Chaudhry Mohammad Aslam advocate, a former protocol officer of Benazir Bhutto, claimed that being party in the deal the government was also reluctant to bring Musharraf back to the country.

He also claimed that they had prepared a weak case against the former president in which he could easily be acquitted.

Mr Aslam had also got a second FIR in this case registered against Interior Minister Rehman Malik, Senator Babar Awan and others.

The aide of the slain PPP leader said the government wanted to use the trial of Gen Musharraf in absentia as an election stunt, since it could not justify Benazir’s murderers being still at large.

Ms Bhutto and 23 other people were killed in a bomb attack outside Liaquat Bagh on December 27, 2007.

The FIA in February 2, 2012, had sent a request to the Interpol through its secretary general based at Lyon (France), seeking issuance of the red warrants for Mr Musharraf.

The Interpol, however, in September, 2012 rejected the FIA request. It claimed that Mr Musharraf was a political personality and asked the FIA to provide more tangible proofs as the available evidence was not sufficient to process the case against Musharraf.

FIA special prosecutor Chaudhry Zulfiqar Ali, when contacted, said that this was the first time in the history of the Interpol that it was asking for what it called “tangible evidence” from a prosecution agency for issuing the red warrants.

This is a matter of clear discrimination by the Interpol because in other cases, it never sought evidence from the Pakistani investigation agencies, he said.

The examination of the evidence is the job of a court, he said adding the ATC, which was the court of competent jurisdiction, had declared Musharraf proclaimed offender in the case.

He said that the FIA was considering to conduct his trial in his absence and a petition in this regard would be filed in the ATC next month.

Barrister Syed Ali Zafar, an international law expert, told Dawn that since former president was living in the UK, his repatriation would not be an easy job for the FIA as Pakistan had not signed any extradition treaty with the UK.

According to him, repatriation in the criminal cases was an easy matter but the requests for repatriation of political personality depended on the consent of the country where the required person lived.

As far as the matter of his trial in absentia is concerned, Barrister Ali said, the court in such cases decided the matter in accordance with the statute and the merits of the case, and the accused person, even after his conviction, could request the court for re-trial after surrendering before it.

Barrister Mohammad Ali Saif, spokesman for Pervez Musharraf, when contacted said that an accused could not be tried in absentia anywhere in the world because it deprived him of his right to fair trial.

The Supreme Court also in its several judgments had declared the trial illegal, he added.

Interpol examined all aspects of FIA request and then declared that the case against Musharraf was based on insufficient evidence, he added.

Replying to a question he said Musharraf had already announced his decision to return to the country before next general elections. “We have also made arrangements for obtaining his bail before arrests from the courts,” he concluded.