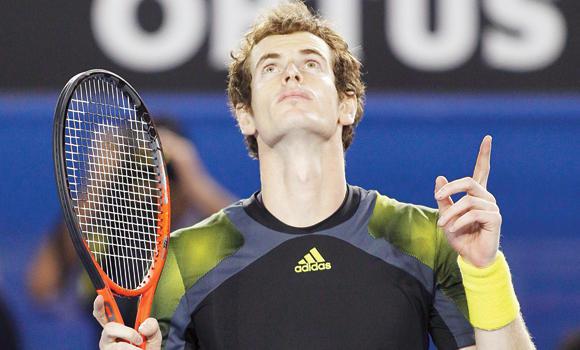 MELBOURNE: Britain’s Andy Murray faced down his Grand Slam nemesis Roger Federer in an electrifying five-set thriller to reach the Australian Open final yesterday.
The US Open champion finally ended his run of Grand Slam failures against the Swiss world number two, winning their semi-final 6-4, 6-7 (5/7), 6-3, 6-7 (2/7), 6-2 in exactly four hours.
Murray is now into in his third Australian final and will play defending champion Novak Djokovic tomorrow, a rematch of the US Open decider when the Scot won his first Grand Slam title last September.
Murray extended his record over Federer, the 17-time major champion, to 11-9, but it was his first victory over Federer in four Grand Slam matches.
It will be Murray’s sixth Grand Slam final and he is the first Briton to reach three Australian Open finals.
“It’s always tough against Roger and he’s at his best in the Grand Slams and when his back is against the wall, and (when) I was serving for the match at 6-5 he produced some great shots,” Murray said.
“I kept fighting and he made a few loose shots early in the fifth set and I stuck in.” Murray, who has now extended his unbeaten run in Grand Slam matches to 13, broke Federer’s serve six times, while dropping his own serve twice, and hit 62 winners, including 21 aces, to 47 unforced errors while Federer committed more errors than winners.
Murray began the better and had five break points in Federer’s opening two service games, culminating in breaking the Swiss in the third game.
The Scot was keeping on Federer’s backhand and earned two more break points before Federer held in the seventh.
Murray went on to take the opening set in 45 minutes, but Federer came back in the second. Games went with serve to a tiebreaker and Federer got the early jump on the back of two forehand errors.
Murray got back one of the mini-breaks but Federer seized on a mishit smash and rammed home a forehand winner for set point, and leveled the match on an overhit forehand.
Murray appeared to be having calf muscle trouble in the third set but he broke Federer in the sixth and went on to take a two sets to one lead with an ace.
The Scot went down on the court wincing as he chased an early break in the fourth set, but it was Federer who struck. Murray fought off two break points but a wide forehand gave the Swiss a break.
He got back the break in the eighth and broke Federer a second time to serve for the match, but was broken on a forehand error.
Federer played a great tiebreaker with three mini-breaks to send the match into a fifth set.
But Murray was too strong in the deciding set with two service breaks to take the match and his second win over Federer on the big stage after last year’s Olympic final.
“I’ve been known for losing a lot of tough matches and big matches, especially here a few times, and having never beaten Roger in a big match until the Olympics,” he said.
“That obviously helps but it doesn’t make it any easier when you’re trying to serve it out.”
Earlier yesterday, top-seeded Sara Errani and Roberta Vinci of Italy won the first title of 2013 at Melbourne Park, beating the unseeded Australian pair of Ashleigh Barty and Casey Dellacqua 6-2, 3-6, 6-2 for the women’s doubles championship.
The 16-year-old Barty was attempting to become the youngest Grand Slam champion since Martina Hingis won the Australian Open singles title in 1997.
Today, defending champion Victoria Azarenka plays sixth-seeded Li Na of China for the women’s singles title. Li lost the Australian Open final to Kim Clijsters in 2011 two months before winning her first and only Grand Slam at the French Open.
“Last time was more exciting, (more) nervous because it was my first time to be in a final,” Li said yesterday. “But I think this time (I’m) more calmed down, more cool.” Azarenka leads 5-4 in career matches, including the last four times they’ve played.
“I’m really hungry to defend my title,” said Azarenka, who needs to beat Li to retain her No. 1 ranking. “I’ve put myself in the position to give it the best shot.” Also on Saturday, American brothers Bob and Mike Bryan will play their fifth consecutive Australian Open doubles final and attempt to win their record 13th Grand Slam doubles championship. They’ll play the Dutch pair of Robin Haase and Igor Sijsling.