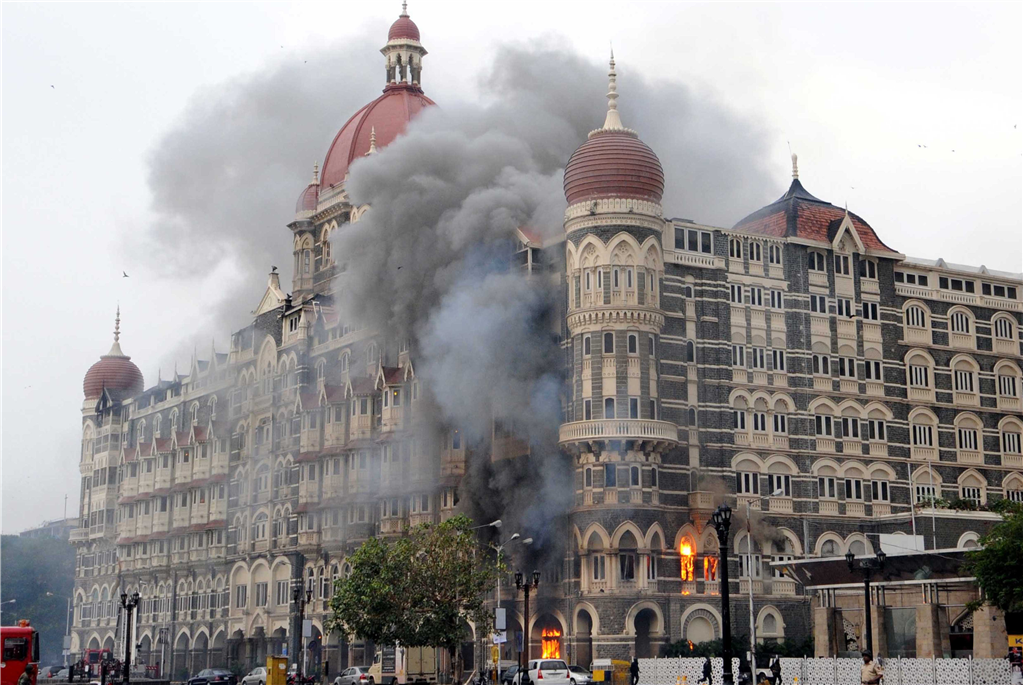 10 men stormed buildings in Mumbai, killing 167 people on November 26-29, 2008. Nine of the gunmen were killed during the attacks, one survived. Ajmal Kasab, the lone surviving gunman, was executed in India in November 2012. Indian authorities claimed the incident had roots in Pakistan and blamed the ISI for being the mastermind behind it. The Mumbai attacks caught the worlds attention and Pakistan was defamed and pushed into a corner by India.Notwithstanding all this, several Indian writers exposed the missing links and put the blame on other quarters.

Indian Urdu author Aziz Burney wrote a book in which he compiled his articles titled RSS ki Saazish: 26/11, he contradicted the investigating agencies’ conclusion that no saffron terror activists were involved in 26/11. Burney was of the view that the circumstances in which some top police officers, specially ATS chief Hemant Karkare died, pointed to involvement of saffron elements in the 26/11 carnage. Basically, he felt that the RSS had a part to play in the carnage and its aftermath.

RSS, Rashtriya Swayamsevak Sangh is a Hindu nationalist, extremist organization with the purported objective of upholding Hindu values and pushing a conservative agenda. This organization has always had a highly controversial profile in India. It was closely associated with Gandhi’s assassination in 1948 and the demolition of Babri Masjid in 1992. Historically, RSS can be said to be an influential, decisive factor at the back of Hindutva, extremist groups. The BJP is the political wing of the RSS. Sangh Parivar (family of RSS) is a broad term to include the 3 dozen organizations related to the RSS.

The Anti Terrorism Squad of India has in the past arrested several Hindu extremists for carrying out bomb blasts in India eg. Ajmer Dargah blasts, Malegaon blasts and Samjhota Express blasts. The terrorist ideology of RSS has crept into the Indian Army and in the past Lt. Col Purohit and Major (retd) Ramesh Upadhyay were arrested for terrorist activities. Lieutenant Colonel Prasad Srikant Purohit, once a top military intelligence undercover operative is incarcerated since five years for providing the RDX for the Malegaon 2008 blast. He stands accused of floating an organisation styled as Abhinav Bharat with “the intention to propagate a separate Hindu Rashtra with their own constitution.” According to the charge-sheet, Purohit collected Rs 21,00,000 for himself and his organisation to promote his fundamentalist ideology. He has also been charged with taking responsibility of providing the explosives.

Some missing links of the Mumbai attack must be considered before blaming Pakistan. The terrorists besieged the Taj Hotel and held hostages for 60 hours without a break even though they were just four in number. Not only that, the Indian Army could not defeat these four individuals and they proved to be formidable opponents. It was claimed that the terrorists were acting on instructions communicated via satellite phones, jammers could have been used to disconnect them quite easily.

Bhupendrasinh Solanki, BJP’s Member of Parliament from Godhra, was at the Taj hotel at the time of the Mumbai attack. Another co-incidence is that the owner of the Oberoi hotel is a close friend of Modi. Modi has been successful in achieving full control of RSS and old pioneer leaders of RSS have lost control of the party.

Mumbai ATS Chief Hemant Karkare had also revealed that terrorist activities were being carried out by BJP politicians and extremist Hindu Sadhus during his investigation of Malegaon attacks.The Mumbai ATS chief Hemant Karkare and other officers of the ATS were casualties of the Mumbai attacks. These same officers had investigated the Malegaon Blasts and arrested Praggya Singh, an army officer and several well-known personalities of the BJP-RSS-Bajrang Dal-VHP. ATS Chief Hemant Karkare started the investigation of the Mumbai attacks and shortly after was ambushed from 3 sides, killed and thrown out of the vehicle and the attackers fled with his car. Karkare had headed towards north Mumbai rather than the hotels where the main drama was being played out. Why would he head in the wrong direction unless it was a trap for him, there are implications that the Indian government wanted Karkare out of the investigation.

The Karkare assassination was covered up, a lot of facts pertaining to the case were never publicized, such as details of the number of bullets, whether their origin was Indian Army, police or terrorists. The post mortem report of the Karkare case would reveal the real perpetrators and planners of the Mumbai attacks. If Hemant Karkare had not been killed in Mumbai’s 26/11 attacks, details of the Hindutva terrorist network would have been revealed.

Indian writer Amaresh Misra also wrote a powerful expos “Headley saga: Mumbai attack was a joint IB-CIA-Mossad-RSS project”. Says Amaresh Misra: “With the row over India getting access to [terrorist] David Headley growing acrimonious each day, the CIA’s double agent saga seems all set to open up a can of incredible worms. First, the case unmasks the pro-US face of the Indian English media. When the Headley saga first came to light, Vir Sanghvi of the Hindustan Times carried an editorial piece claiming that if ‘Headley is CIA, and knew about 26/11, the CIA knew about the attack.’ In other words, Sanghvi accepted the ‘conspiracy theory’–which in the eyes of the English media was ‘peddled’ by Aziz Burney and this author during the terrible aftermath of 26/11–that the event was a CIA/Mossad/RSS plot. In November-December 2008, Vir Sanghvi and his cohorts in the English media attacked both Aziz Burney and this author for spelling forth the ‘conspiracy theory’. Then after Headley’s name surfaced, they changed tune, without of course admitting their debt to Mr. Burney or this author… ”

Amaresh Misra said in his article Mumbai Terror Attacks: the Mossad Angle on 27.11.2008 ” a photograph published in Urdu Times, Mumbai, clearly shows that Mossad and ex-Mossad men came to India and met Sadhus and other pro-Hindutva elements recently. A conspiracy was clearly hatched.”

He says “They killed Hemant Karkare, chief of the police anti-terrorist squad in Mumbai, to send a message that you cannot investigate the Mossad-RSS angle” “Our worst fears have come true. It is clear that Mossad is involved in the whole affair. An entire city has been attacked by Mossad and probably units of mercenaries. It is not possible for one single organization to plan and execute such a sophisticated operation. It is clear that this operation was backed by communal forces from within the Indian State.”

The role that Nariman House played in the backdrop of the entire attack drama, is puzzling. The firing by terrorists began from Nariman House, which is the only building in Mumbai inhabited by Jews. A night before, its residents ordered close to 100 kilograms of meat and other food, enough to feed an army or a bunch of people for twenty days. Shortly thereafter, the ten odd militants moved in, obviously, indicating that the food and meat was ordered, keeping their visit in mind. Hindu Gujarati residents of the area spoke live on several TV channels saying suspicious activities went on at Nariman House but the government did not take any notice.

Headley and CIA cannot be de-linked from the Mumbai attacks either. America’s compromise with David Coleman Headley, one of the masterminds of the attacks, was a mystery. Apparently used by the CIA to hunt Osama bin Laden, he visited Mumbai seven times to reconnoitre the Taj Mahal Palace Hotel and other targets, and provided supplies and GPS co-ordinates for the 10 gunmen who took part. When India discovered his role, it accused Washington of having sacrificed Mumbai for the prime target of the al-Qaeda leader. David Headley, a former drug smuggler, was acting as a “highly prized counter terrorism asset” for America, according to former officers in the Joint Terrorism Task Force, who said his covert career had run for 11 years. How is it possible that the American asset traveled to Mumbai that often and they never tried to find out what he was doing, in the world of espionage that is impossible.

In another interesting turn of events, an ex IB officer accused the Indian government of orchestrating the Mumbai attacks and the attack on Indian parliament. R V S Mani, a home ministry under secretary, said that Satish Verma, until recently a part of the CBI-SIT probe team, told him that both the terror attacks were set up “with the objective of strengthening counter-terror legislation “.

Mani has said that Verma “…narrated that the 13.12. 2001 attack on Parliament was followed by Pota (Prevention of Terrorist Activities Act) and 26/11 2008 terrorists’ siege of Mumbai was followed by amendment to the UAPA (Unlawful Activities Prevention Act).” Mani alleged that Verma levelled the damaging charge while rejecting Indian intel inputs.Verma, a Gujarat cadre IPS officer who after being relieved from the SIT is working as principal of the Junagadh Police Training College.

Mani told his seniors that he told Verma that essentially he was articulating the views of Pakistani intelligence agency ISI and rejecting Indian intel.