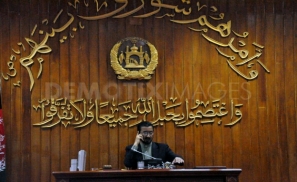 KABUL: The new president and Chief Executive Officer have been inaugurated last month but the cabinet is still incomplete as the two leaders would have to show consensus on picks for the key slots while reaching an agreement over number of ministries. For public and lawmakers the main concern is capability of cabinet members who would be responsible for running affairs of their respective ministries efficiently.
Asking the national unity government to observe merit and avoid favoritism, several members of the Lower House said the new ministers had to be talented, well-qualified and patriot. They said that ministers who have no criminal background and had knowledge about functions and duties of the respective ministry would be able to address challenges and resolve problems faced by citizens.
Nadir Khan Katawazi, an MP from Paktika province, said President Ashraf Ghani Ahmadzai should not make mistake while forming the new cabinet. He added that introducing capable and new faces as ministers would double the dignity and reputation of the government.
“It will be a disaster for the national unity government if former ministers or those who were involved in corruption were reappointed. Those who promoted corruption culture in the country should be kept at arm’s length. The government shall search for and appoint patriot and honest persons as ministers in order to serve public wholeheartedly,” he said.
Katawazi further said that those who are involved in corruption should be brought to the court of justice. He suggested strict accountability mechanism to ‘catch big fish’ who have built assets in Afghanistan and foreign countries through unfair means. The graft cases should be investigated and corrupt officials should be dismissed, he proposed, adding, “If the new government takes such actions against those officials involved in corruption then definitely the people will trust more the new administration.”
Ghulam Hussain Nasiri, an MP from Maidan Wardak province, believes that if the cabinet was mixture of new and old faces then public would lose trust in the government and there would be no significant development if compared to the previous government as there would be no end to corruption.
Providing suggestions to the new government about formation of talented cabinet, Aryan Yoon, an MP from Nangarhar province, said that priority should be given to sincerity, knowledge, capability and patriotism when appointing ministers rather than personal relations or ethnic affiliation.
“If the cabinet was comprised of talented and committed persons then it will be not difficult to fight corruption and prevent mafias from creating challenges. Though, it seems difficult but is not impossible. First, the government shall introduce skilled figures as ministers and later take the corruption cases seriously; otherwise dreams of prosperity and development will not come true,” she said.
According to sources in the Afghan parliament, the government is going to introduce ministers to the Lower House for vote of confidence in November. It is said that work over list of the future ministers is in final stage.