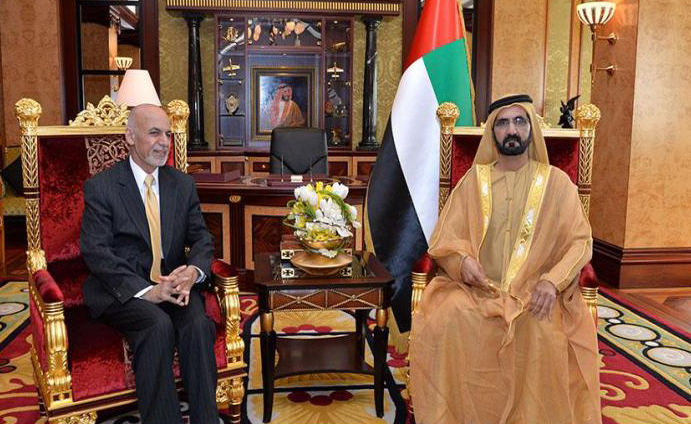 Sheikh Mohammed and President Ghani discussed overall latest regional and international political, security and economic developments, as well as ways to ensure stability and development in the region.

The Vice President and the Afghan President also tackled the bilateral relations between the UAE and Afghanistan and ways to boost them in all fields, especially in economic, trade and development domains.

President Ghani expressed his country’s desire to benefit from the UAE’s successful experience in the areas of government administration and smart government, highlighting the cultural and urban development being witnessed by the UAE led by its prudent leadership.

During the meeting, the two parties affirmed the importance of building strategic ties in the light of the UAE’s unique experience in various economic, technological, infrastructure and social development and other areas, and also in view of stability and potential growth opportunities in Afghanistan, which seeks to become a bridge between the UAE, and China and India.

Sheikh Mohammed was briefed by the Afghan President on the latest developments in Afghanistan and its ties with neighbouring countries, referring to the stability in his country and keenness to preserve good relations with Afghanistan’s neighbours.

Sheikh Mohammed said that the UAE places all its expertise and development experience in various sectors in the service of fraternal and friendly peoples to help them achieve growth, prosperity and stability for their peoples.

Vice President and President Ghani attended the signing ceremony of the strategic partnership charter between the UAE and Afghanistan. The charter was inked by Dr. Anwar bin Mohammed Gargash, Minister of State for Foreign Affairs, and Afghanistan’s national security adviser, Mohammad Hanif.

The charter deals with bilateral relations and enhancing joint cooperation in various fields.