The decision to rebrand the Canadian Forces touched off a royal ruckus of sorts last year as National Defence went about extending the name change to the military’s smaller branches, documents suggest.

Restoring the prefix “Royal” to the navy and air force has since become a huge point of pride for the Harper government, which billed the move as one that would help today’s soldiers, sailors and aircrew connect with their storied history.

But it’s not as simple as new business cards and stationery.

Each designation must meet with the Queen’s approval, something that takes protocol and paperwork. The latest recommendations have already been forwarded to Buckingham Palace.

Prior to the unification of the Forces in 1968, each branch of the military maintained its own separate engineers, logisticians and signallers. They’re combined now, with each branch contributing people to the pooled system.

The Canadian Army was never designated “royal,” but was eager to re-adopt the prefix for many of its sub-commands, including engineers, signallers and logisticians. But the documents show the move was considered “divisive and a potential threat” to unity if their air force and navy counterparts were excluded.

It was seen as a point of tension and “controversy,” said the analysis, dated Oct. 13, 2011. Lt.-Gen. Peter Devlin was urged to consult other commanders to smooth the way.

Despite three days of requests, National Defence refused to comment on the documents. But Defence Minister Peter MacKay said earlier this week he believes the designation has been “warmly embraced” by those in uniform. 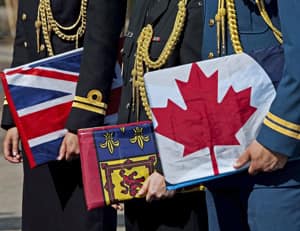 Navy, army and air force officers, left to right, hold flags of the three forces at a ceremony in Halifax to announce the renaming, Aug. 16, 2011. (Andrew Vaughan/Canadian Press)

“It has long been associated with the Canadian Forces since our inception, but it has also been warmly embraced by veterans, by Canadians far and wide, and it was well received within the Commonwealth,” MacKay said.

“I suspect the Queen herself was quite happy.”

The army chose to drop the antiseptic-sounding Land Forces Command and returned to its roots as simply the Canadian Army.

The artillery and armoured corps were eager to designate themselves as “royal” once again, documents show. In fact, the tank branch never stopped informally referring to itself in the traditional sense and gunners petitioned years ago for permission to restore their connection to the monarchy.

The military’s seemingly single-minded focus on being associated with the monarchy may strike Canadians — especially younger ones who’ve grown up with modern multiculturalism — as a bit odd, or even unimportant.

But in an interview last winter, the commander of the Royal Canadian Navy said the attraction rests in tradition and being able to connect with one’s roots. 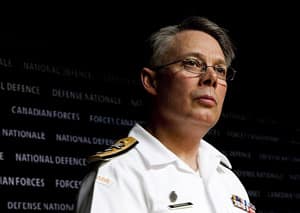 The Royal Canadian Navy’s commander, Vice-Admiral Paul Maddison, says he was hesitant about how young sailors would react to the name change, but has been pleased with the response. (Sean Kilpatrick/Canadian Press)

Vice-Admiral Paul Maddison likened the 1960s homogenization of military designations to taking away a person’s name and referring to them as: “Hey you.”

Maddison conceded he wasn’t sure how last year’s decision would play.

“I was a little hesitant about the younger sailors and how it would resonate with them, [but] it resonated extremely well. So I’m really pleased by the effect it has had,” he said.

Ironically, it was the navy that acted as a major catalyst in the decision to distance the Canadian military from the monarchy in the first place.

Following the Second World War, many Canadian sailors were unhappy with the harsh disciplinary standards and no-nonsense attitude of their officers, whose command style had been forged in the crucible of battle.

In the span of three weeks in the winter of 1949, three Canadian warships were struck with mutinies, where crew members refused to obey orders.

A resulting inquiry — the Mainguy Commission — found that the “absence of a distinguishing Canadian identity” was among the factors. Nearly two decades later, the Liberal government amalgamated the Forces in a radical overhaul that stripped each branch of its identity.

“We did move away from that relationship with the Royal Navy from a cultural perspective,” said Maddison.