Mermaids? Meet the gentle mermaids of the sea! 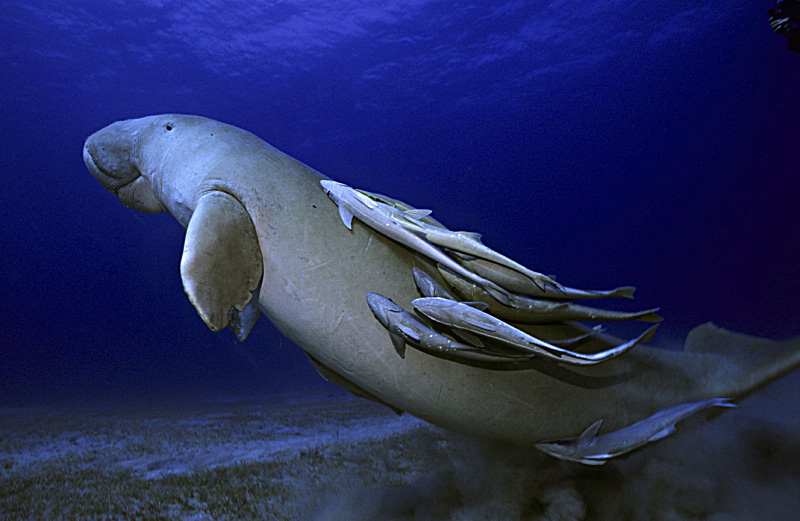 The dugong is the only entirely marine mammal to feed exclusively on plants, a trait that leads to its other common name of ‘sea cow’. These large, rotund animals have short, paddle-like front flippers and a fluke-like tail, with a straight or concave edge, that is used for propulsion. The thick skin is a brownish-grey color and there are short, coarse hairs sparsely distributed over the body but concentrated as bristles on the muzzle. All dugongs grow tusks but these only break the skin, and therefore become visible, in mature males.

Dugongs are usually seen as solitary individuals or in a group of two, although larger groups of several hundred individuals have often been recorded. The most stable and long-lasting groups appear to be mother and calf pairs. The single calf, born after a gestation period of around 13 to 14 months, measures over a meter in length at birth, and suckles from the female for around 18 months. Dugongs can be extremely long-lived, reaching ages of 70 years or more.

Both dugongs and manatees have a low metabolic rate, allowing them to exist on a herbivorous diet, and consequently they usually move relatively slowly 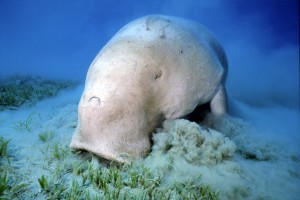 The dugong has a wide range throughout the Indo-Pacific region, from the east coast of Africa to islands of the western Pacific, such as Vanuatu. Many populations are today severely depleted or almost extinct; the majority is found off the coast of northern Australia, with the world’s second largest population found in the Arabian Gulf.

The dugong is a sea grass specialist that inhabits shallow and protected coastal waters in tropical seas. More strictly marine than manatees the dugong is seldom found in freshwater. 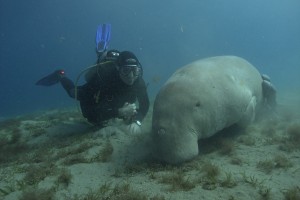 The dugong has been traditionally persecuted by humans throughout much of its range for its meat, hide and oil. Its rather slow movement, large size and dependence on coastal habitats have made the dugong particularly vulnerable to human impacts, while the low reproductive rate, long generation time and high investment in each offspring mean populations can take a long time to recover from any losses. Fishing nets have also been a major cause of population decline, as dugongs are unable to hold their breath for more than about 12 minutes and therefore easily drown once entangled. In addition, the sea grass ecosystems on which this species depends are highly sensitive to human impacts, such as from mining, trawling and dredging. 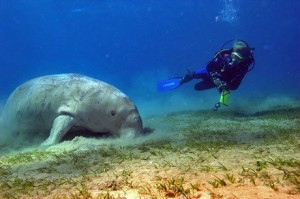 Dugongs have decreased in number throughout their range to the extent that in some areas only relict populations remain, but a significant stronghold still persists in Australia. Even here, however, these animals are under threat from fishing nets, habitat loss from the silting of sea grass beds, pollution, boat traffic and illegal hunting. 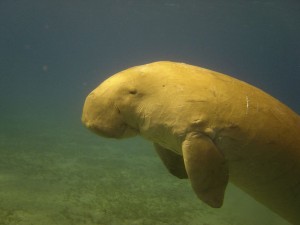 International trade in dugongs is banned by its listing on Appendix I of the Convention on International Trade in Endangered Species (CITES). The species is found within the Great Barrier Reef World Heritage Area, and the Great Barrier Reef Marine Park Authority is currently working with other agencies in an effort to halt the decline in the dugong. An action plan is also in place for the species, and in Australia a system of 16 Dugong Protection Areas, where there are key populations, has been established, and there is ongoing research into the dugong’s distribution and behavior. However, the IUCN report that little effective management intervention has yet been put in place to reduce the human impacts on the dugong. Measures such as the protection of its sea grass habitat will be crucial if this gentle ‘mermaid of the sea’ is to survive.

Environment Agency – Abu Dhabi is a principal sponsor of Archive. EAD is working to protect and conserve the environment as well as promoting sustainable development in the Emirate of Abu Dhabi. 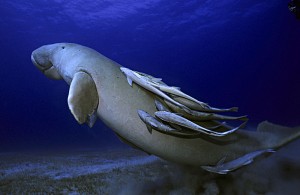 The Australian state of Queensland has sixteen dugong protection parks, and some preservation zones have been established where even aborigines are not allowed to hunt. Capturing animals for research has caused only one or two deaths; dugongs are expensive to keep in captivity due to the long time mothers and calves spend together, and the inability to grow the sea grass that dugongs eat in an aquarium. Only one orphaned calf has ever been successfully kept in captivity.

Worldwide, only five dugongs are held in captivity. A female from the Philippines lives at Toba Aquarium in Toba, Mie, Japan. A male also lived there until it died on 10 February 2011. Another is at Underwater World, Singapore, due to its mother being killed when it was a calf.  A third resides in Sea World Indonesia, after having been rescued from a fisherman’s net and treated. The last two, a male and a female, are kept at Sydney Aquarium, where they have resided since they were juveniles.