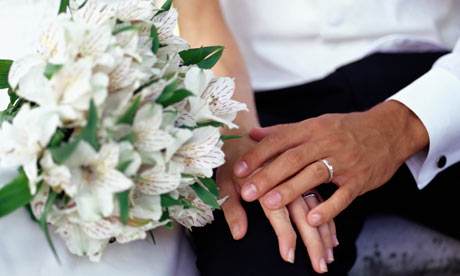 Being married could be the key to a longer life – by improving your chances of surviving middle age, claim scientists.
People who never married were almost three times as likely to die early than those who had been in a stable marriage throughout their adult life US researchers found.
The new research suggests for the first time that not having a spouse in midlife increases the risk of dying during those years.

Being single after 40, or losing a partner without marrying again, increased the risk of early death during middle age and cut the chances of getting to 60.
Even when personality and risky behaviours such as smoking and drinking were accounted for, married people were still 2.3 times more likely to survive.
The new study was carried out by Dr Ilene Siegler and colleagues from the department of behavioural sciences at Duke University Medical Center, North Carolina.
She said ‘In sum, having a partner during middle age is protective.
‘Being single or losing a partner without replacement are the situations that increase mortality risk during middle age and decrease the probability that one will survive to be elderly.
‘New research on chronic loneliness may provide a partial explanation for our findings’ she added.
Dr Siegler said living to a ripe old age is expected, particularly for people who reach the age of 40, which makes it important to understand why some people do not survive to become elderly.
Getting and remaining married has long been associated with better survival, especially for men, but the impact on the risk of dying in middle age has not been previously researched, she said.
In a new study, researchers analysed data for 4,802 individuals who took part in the University of North Carolina Alumni Heart Study (UNCAHS) – an ongoing study of individuals born in the 1940s.
Those taking part were aged around 40 at the start of the study, and were in their late 50s by its conclusion. They completed four questionnaires at regular intervals.
The researchers recorded stability and change in patterns of marital and non-marital status during midlife, and looked at the effect of personality traits during the late teens, socioeconomic status and health risk behaviours.
Altogether 238 deaths were reported during the study, including 32 women.
Researchers found those who had never married by midlife were at highest risk of death.
ref: http://www.dailymail.co.uk/