A man in his 40s was shot dead near where Pauline Marois was giving her victory speech to supporters before midnight Tuesday, prompting a swift response from the Parti Québécois leader’s security team and an evacuation of the downtown Montreal concert hall.

“I would be lying to you to confirm 100 per cent that there was no danger to her or the people inside, but the shot was fired at the back of the building,” Cmdr. Ian Lafrenière of the Montreal police told reporters outside the scene.

A second man was critically injured in the incident, according to Montreal police. Just before 1 a.m., police confirmed a man in his 40s was pronounced dead at the scene.

A third man was taken to hospital and treated for shock.

“For us, this is considered a homicide scene,” Lafrenière said. It’s the city’s 22nd homicide of the year.

“What age exactly [the victim was], what was he doing here, I’m not going to confirm that,” he said, adding the man’s family had not yet been notified.

A man was swiftly arrested outside the venue and a weapon was seized.

The man, with his face partially covered, allegedly entered the venue from the back as Marois was giving a jubilant address calling for unity among Quebecers. The back door was about six metres from the stage.

“He shot at least one shot toward two victims,” Const. Danny Richer said.

“We don’t know what was [behind] that event,” he continued. “Our investigators are going to meet with him overnight.”

The man then allegedly set a fire at the rear door of the building before he was detained by police.

Officers who were on scene extinguished the fire, Lafrenière said. Television images showed officers holding a man on the ground before he was led to a police car as well as officers handling a weapon that appeared to be an assault rifle.

According to the Canadian Press, the man shouted in French at TV cameras while being dragged toward the cruiser, “The English are waking up!” Police would only say that he spoke with an accent.

After Marois was rushed off stage, actor Yves Desgagnés, who was acting as master of ceremonies for the evening, took the stage and told the crowd there was a glitch, someone had fired a blank and that everything was under control. 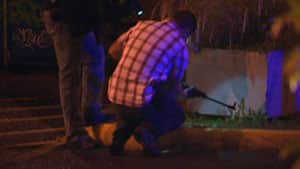 A gun is inspected after the shooting in Montreal. (CBC)

Marois returned to the stage a short time after and asked the crowd to calmly leave the building before concluding with a few more lines of thanks and congratulations.

Police said she was in “good condition” and was not harmed.

Lafrenière said investigators were searching the suspect’s car and he may have had more than one weapon. It was too early to comment on any alleged motive for the shooting, Lafrenière said.

“This is not a movie, this is not a TV series,” Lafrenière said. “We have to conduct a complete investigation.”