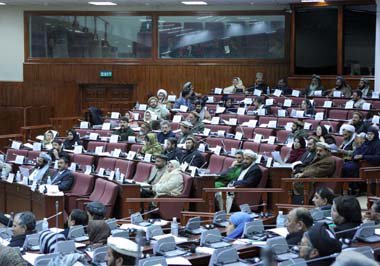 Administrative Board members at the House of Representatives have said that there is strong commitment to bringing changes to the job descriptions and authorities of the election commissions. Representatives would not allow themselves to be pressured away from the reforms, they added.

The House of Representatives is expected to put the Job Description and Authorities of Electoral Commissions Law up for a vote in the upcoming weeks. Sources inside the House have said that the new law would see the current members of the electoral commissions relieved of their duties.

Commissions of the Lower House will be reviewing the draft of the new law, which was first proposed by the Legal and Judicial Commission.

“The House of Representatives is committed to bringing changes in this law, and we think that the only legal way for bringing change to the electoral commissions is through this law,” Deputy Secretary of the House Irfanullah Irfan said.

Officials from the Independent Elections Commission (IEC), however, have rebuked the move by Parliament. With the threat of losing their jobs hanging over them, commission officials have maintained that changing the election law during an election year is unconstitutional.

But the he’d of Legislative Issues at the House of Representatives, Qazi Nazeer Ahmad, has said the the IEC officials misunderstand what exactly the legislators are doing. “We are not having any discussions regarding the election law, because the Constitution does not allow us to change the election law,” Mr. Ahmad said on Monday. “But the discussing the Job Descriptions and Authorities Law of the Electoral Commissions, and changing the law, has no legal issues…”

Many representatives have already reviewed the draft law and called its ratification an important step for bringing reform to the electoral commissions, which were the subject of heavy criticism from Parliament and elsewhere for the tumult of this year’s election process.

“Among the responsibilities of Parliamentarians, making law is a duty, we can bring changes in the areas of the law that we see defects in,” Maidan Wardak MP Ghulam Hussain said.

“Mr. President himself said the commissions need reform and one of the ways is this law,” Farah MP Muhammad Sarwar Usmani said.

Based on the draft law, members of the election commissions will be introduced to the House of Representatives for a vote of confidence after being selected by the President and CEO, with their term of service bumped down from six years to two and half years.

In addition, two international observers will be permanent members of the Electoral Complaints Commission (ECC).