“Living under Drones” Report by US universities 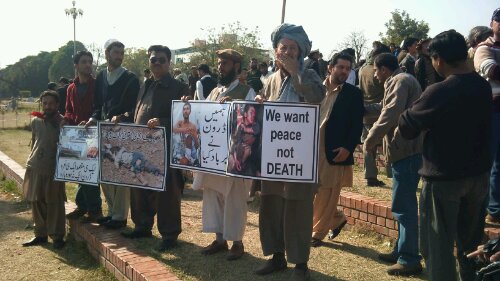 ‘Living Under Drones’, a new report from Stanford and New York universities, was a difficult piece of fieldwork — I was with the law students in Peshawar as they tried to interview victims of the CIA’s drone war. But it has made an important contribution to the drone debate by identifying the innocent victims of the CIA’s reign of terror: the entire civilian population of Waziristan (roughly 800,000).

Until now, the dispute has revolved around how many drone victims in the Pakistan border region are dangerous extremists, and how many children, women or men with no connection to a terrorist group. Until the area is opened up to media inspection, or the CIA releases the tapes of each Hellfire missile strike, the controversy will rage on.

However, there can be no sensible disagreement over certain salient facts: first, the US now has more than 10,000 weaponised drones in its arsenal; second, as many as six Predator drones circle over one location at any given time, often for 24 hours a day, with high-resolution cameras snooping on the movements of everyone below; third, the Predators emit an eerie sound, earning them the name bangana (buzzing wasp) in Pashtu; fourth, everyone can see them, 5,000ft up, all day — and hear them all night; fifth, nobody knows when the missile will come, and turn each member of the family into what the CIA calls a “bugsplat”.

The Predator operator, thousands of kilometres away in Nevada, often pushes the button over a cup of coffee in the darkest hours of the Waziristan night, between midnight and 5am. So a parent putting children to bed cannot be sure they will wake up safely.

Every Waziri town has been terrorised. We may learn this from the eyewitness accounts in ‘Living Under Drones’, or surmise it from the exponential increase in anti-anxiety and anti-depression medication across the region. Sometimes it is difficult for those in the west to understand. But for me, it brings to mind my mother, Jean Stafford Smith. In 1944 she was 17. She had left the safety of her school in the countryside to do a secretarial course in London. Each evening she took the bus home from Grosvenor Place, behind Buckingham Palace, to her digs off Tottenham Court Road. Back then, darkness would truly descend on the city, as the blackout was near total.

Sixty-eight years on, my mother retains vivid memories of the gathering gloom. When the doodlebugs (as V1s — Hitler’s drones — were called) came over, she knew that she was safe so long as she could hear the engine; only when they fell silent did she have to worry where they might fall.

In 1944, two doodlebugs hit the environs of Buckingham Palace, near where my mother learned shorthand. One blew out the secretarial school’s windows. A second killed more than 100 people who had been singing hymns in the Guards Chapel on Birdcage Walk. It was a weekend, so my mother was back at her digs.

My mother, an eternal optimist, never really thought she was going to die, even when — on June 30 1944 — a drone struck Tottenham Court Road. Perhaps reminiscent of the tragedy of 7/7 (the tube and bus attacks in 2005), a witness described “a bus, still packed with people sitting in all the seats, but all the glass blown out and all the skin blown off their faces”.

Many suffered far more than my mother. Indeed, fear for those you love can be more devastating than facing danger yourself: my grandmother Vera, a formidable woman, lived 60 miles north of London near Ely, and worried constantly about her youngest daughter. The ripples of anxiety spread wide.

So little changes. Current RAF doctrine tells us, euphemistically, how “the psychological impact of air power, from the presence of a UAV (unmanned aerial vehicle) to the noise generated by an approaching attack helicopter, has often proved to be extremely effective in exerting influence…” Perhaps they mean “terror”, as described by David Rohde, a former New York Times journalist held by the Taliban for months in Waziristan.

Rohde describes the fear the drones inspired in ordinary civilians: “From the ground, it is impossible to determine who or what they are tracking as they circle overhead. The buzz of a distant propeller is a constant reminder of imminent death.”

I hope that this report reminds us all what the US — with British support — is doing to the people of Pakistan. Maybe then there will be less surprise at the hatred the drone war is engendering in the Islamic world — and a chance that we will reconsider what we are doing.