Lindsay Lohan holds the Quran as she leaves her community service 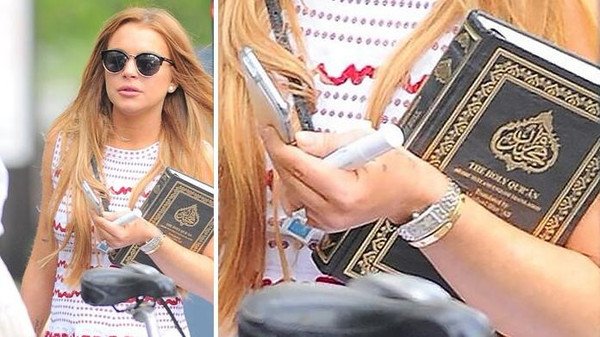 Lindsay Lohan was spotted in New York on Wednesday leaving her court-appointed community service gripping a copy of the Quran, the Muslim holy book, British newspaper the Daily Mail has reported.

Lohan was sentenced to 125 hours of community service in 2012 after pleading guilty to reckless driving and lying to police. She is currently serving out her sentence in a children’s center in Brooklyn, New York.

It has been widely reported that the actress has been known to explore religions. She was raised a Catholic and in her younger years was often seen wearing a Christian crucifix. She was also seen wearing a Jewish Kabbalah – the red string bracelet in later years.

In 2012 she reportedly joined Courtney Love’s Buddhist chanting group. But the most recent speculations suggest she is now exploring Islam.

In 2014 Lindsay made a documentary-series about her life with Oprah Winfrey where she told the talk show host that she was a “very spiritual person.”

“I’ve become more spiritual as time has gone on. I’m really in touch, whether it’s prayer or meditation… there are so many greater powers than me in the world. I’ve been blessed and lucky enough to have been given a gift to share with other people,” she said in her docu-series.

Previously the 28-year-old was known for her partying antics, and opened up about her addiction to alcohol to Oprah in her documentary entitled “Lindsay”.

The Quran advocates a life free of alcohol for Muslims and Lohan has recently said that she intends to embark on an “emotional detox”, free from alcohol and dating.