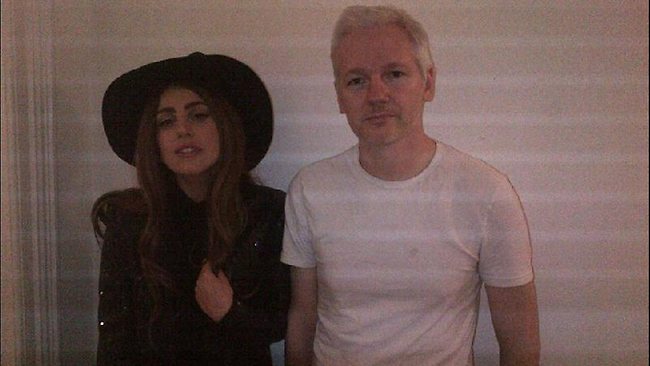 SHE happened to be appearing at Harrods across the road so the never-publicity shy pop star Lady Gaga paid a visit to Julian Assange in his Ecuadorian Embassy sanctuary in London, adding another element to the absurd situation.

The visit came as a court ordered supporters and friends of the 41-year-old Wikileaks founder hand over $150,000 they had offered as surety for his bail which he jumped when he sought asylum in the embassy.

The singer, who puked on stage the day before, arrived at the embassy about 7pm and stayed five hours, sharing a meal with the Australian activist in his backroom of the embassy in the upmarket Knightsbridge in central London.

Dressed in black and wearing a witches hat, she posed with a beaming Assange with the images posted immediately on the web. Assange had a stain on his shirt.

Record label stablemate the rapper M.I.A had early Tweeted that if Gaga was at Harrods, to pop over to the embassy adding “I’ll bring Tea and Cake”.

Perhaps it is no coincidence the constant publicity seeking Lady Gaga was already in London for what publicists claimed would be a “tea party” to promote her new perfume Fame.

Meanwhile a court has ordered Assange’s other mates pay the surety they had offered the courts for his bail before he breached them to seek political asylum in the embassy on June 19.

Among those ordered to pay pledged bonds are an Australian journalist, two members of the British aristocracy and a Nobel Prize winner.

Assange was arrested in December 2010 on an extradition warrant from Sweden where he is wanted for questioning over two alleged sex assaults. He has denied any wrongdoing and claims the move was aimed at securing his further extradition to the US where he potentially faces charges over the public release of hundreds of thousands of secret diplomatic and other cables.

He said the US plot – which he claims involved the Australian government – prompted him to jump bail and risk his friends’ monies.

“I accept that they trusted Mr Assange to surrender himself as required,” the Westminster Chief Magistrate Howard Riddle said. “I accept that they followed the proceedings and made necessary arrangements to remain in contact with him.

“However, they failed in their basic duty, to ensure his surrender. They must have understood the risk and the concerns of the courts.”

They were given till November 6 to pay up.

Justice Riddle added that in not encouraging Assange to surrender: “They have acted on their beliefs and principles throughout. In what is sometimes considered to be a selfish age, that is admirable.”

Assange supporter and financial backer who also put up the activist at his country mansion for a year prior to his court hearing, Vaughan Smith, argued on behalf of surety providers that the case had dragged on and no monies should be forfeited.

“Nobody wants to lose 12,000 pounds and though my family may now live less comfortably, at least we will be able to live with ourselves,” he said outside court.

“We believe we have done the right thing and have no regrets for having supported Julian Assange.”

The other backers to have to pay include Australian journalist and author Philip Knightly, Nobel Prize winning scientist Sir John Sulston, Lady Caroline Evans, Marchioness of Worcester and former actress Tracy Ward , retired professor Tricia David, friend Sarah Saunders, Joseph Farrell and Sarah Harrison. It could have been worse for the group with the full surety being almost $225,000 but the court considered three arguments for financial hardship.

Assange has been granted asylum in Ecuador but faces arrest if he leaves their diplomatic compound in London. The governments of Ecuador and the UK continue to have high level talks on how to break the impasse on his future and Assange has vowed to remain in his single room at the back of the embassy – watched by British police 24 hours a day – for as long as it takes.