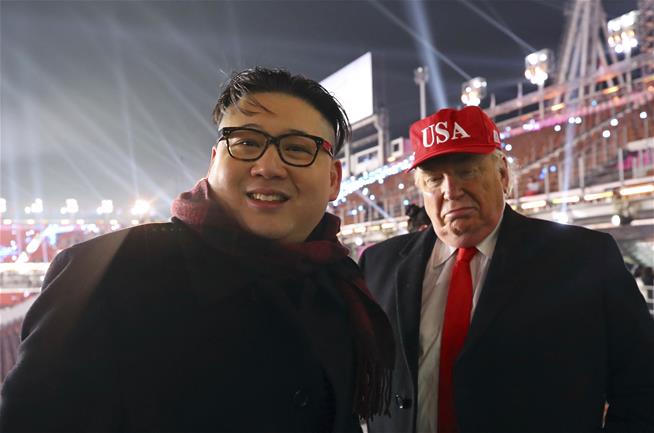 (NEWSER) – President Trump and Kim Jong Un were kicked out of the Winter Olympics opening ceremony Friday, Reuters reports. Or at least that’s what it looked like. In fact the two men briefly hassled by security at the main stadium in Pyeongchang were only impersonating the world leaders. “We wanted to surprise everyone and bring world peace and then we’re being escorted out by security guards, which I think is really unfair,” not-Kim says. “Doesn’t everyone want peace?” Reuters states the impersonators “caused a commotion” in the stands before promptly being escorted out by ushers. The pair were mobbed by a scrum of reporters, which the Los Angeles Times states proves “reporters in other countries chase stupid stories, too.”

Not-Kim says he and not-Trump are “getting along great” and tells the Independent he thinks their real-life counterparts will feel the same way if they ever meet “because in my opinion, they’re pretty much the same person.” “Both of our buttons are very big,” not-Kim adds. “We both agree on that, so there’s going to be peace.” While the impersonators were briefly detained by security, they were allowed back to their seats after proving they had tickets. “Of course,” the Times quotes not-Kim as saying. “We paid good money for it. We’re not thieves, you know. I can afford it. We’re rich.” Not-Kim says his real name is Howard (“Just Howard; like Madonna”) and not-Trump is Dennis Alan. They both appear to be professional impersonators… see more