Just too many coffee shops around: Korea

by Newsmaster
in Business
0

Coffee shops are mushrooming to provide Koreans who crave caffeine with their daily fix. New cafes pop up every day in nooks and crannies of cities across the nation. It’s not surprising at all that South Korea is sometimes called the “Republic of coffee.”

You can come across a coffee shop every 50 meters as you walk along any street on which office buildings are located in Seoul.

To stay afloat in this red ocean in which competition is getting fiercer amid dwindling profit margins, the owners of coffee shops ? especially those running small ones ? are struggling to come up with various strategies to attract customers, offering them discounts or free coupons.

“I started this business because it was something that I had always wanted to try,” said Park in his 30s who runs a 15-square-meter coffee shop located inside a company building in Chungmuro, Jung-gu, Seoul. “But circumstances have not always been as favorable as I had hoped, with more coffee shops sprouting nearby,” he said. 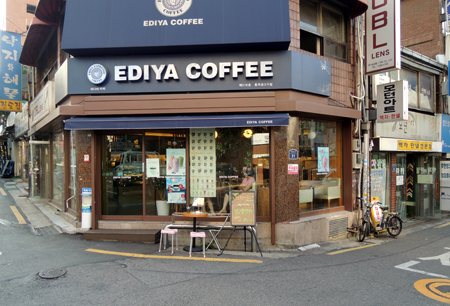 There were several owners before him who sold coffee at the location of his business. The previous owners didn’t last long because they couldn’t make ends meet.

Park hires one full-time employee and a part-timer. He is faring relatively well in comparison to predecessors who ran the shop. His strategy is to maintain the quality of the coffee and sell it at mid-range prices, an approach taken after considering the issues that caused the business to fail before he took it over.

“There would have been a number of reasons but one of them might have been because the prices that the previous owner had set were simply too low. Considering the rental costs of this place, he should have raised the costs, but he was forced to compete with other smaller stores offering lower prices,” Park said.

Naturally, when Park started, he had a difficult time because he lost some customers after he raised the prices. But over time, he managed to secure regular patrons and a few months later, the business was doing much better. 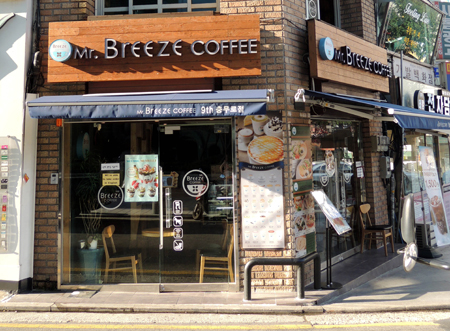 “When I started, I decided that I would put a lot of effort into providing quality service,” said the owner. “I try to treat customers as family members. This might be because I heard that the owner before me didn’t pay much attention to that aspect.”

And this strategy helped him compete with other nearby coffee shops charging lower prices. The shop also offers morning discounts in which all beverages are sold at 1,000 won cheaper than normal prices from 8 to 10 a.m.

But sales have been decreasing since last winter, said Park, adding that the sluggish domestic economy might be the cause. And competition is far higher than ever.

“Owners of bars in the same neighborhood usually become friends and stick together, even though they might be competitors to each other. But owners of coffee shops are different; it seems like they’re always on guard against each other,” he said. “Even when I go and buy a cup of coffee to help their sales, they tend to look at me as though I’ve come to spy on them or something.” 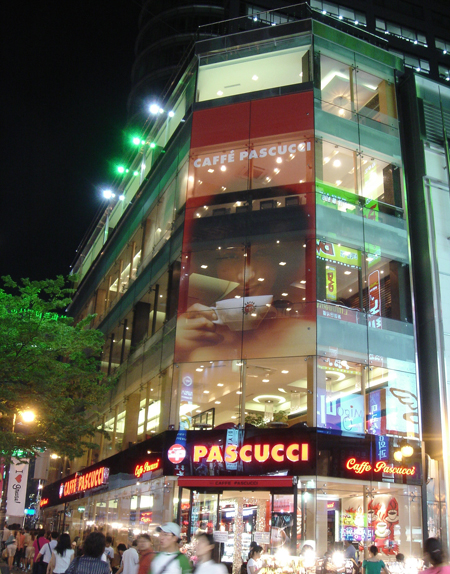 Just meters away is another coffee shop sizably smaller than Park’s.

“We’ve decided to open a coffee shop because we thought it would be a relatively easy business to run,” said Kim, one of the two young owners of a small coffee shop along the street. “But it turns out it isn’t.”

Physical labor is the hardest part of the job, she said.

The 4-square-meter shop from which most customers take out their drinks teems with people at lunch time, when office workers go to get coffee after grabbing a bite to eat.

“People think the production costs of making coffee are low, so they assume that the coffee-making business is highly profitable,” said the other owner. “But it can only be really profitable if you charge a lot for the coffee you sell. Starbucks and other large coffee franchises that charge twice as much as we do of course earn a lot more than us.” 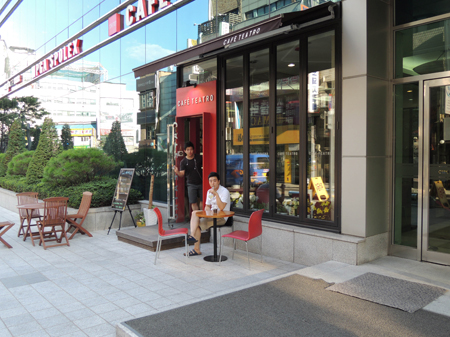 When the two opened the shop last year, they said their prices were the lowest in the neighborhood.

However, with new coffee shops popping up along the streets over time, they no longer offer the cheapest coffee on the block. “Sales have definitely decreased since then,” another owner said.

But they are still running their business thanks to their relatively low prices in a district that seemed to have reached saturation point.

“I don’t think many people buy their coffee based on the taste, at least over here. If the taste is more or less the same, people prefer cheaper coffee, since most customers in this neighborhood are office workers who buy at least one cup of coffee every day.”

The situation is not much different in satellite cities around Seoul. New coffee shops are opening up in Ilsan, Bundang and other towns in Gyeonggi Province. Their main customers are housewives and students living in apartment complexes.

Lee Jeong-sook, 46, started a coffee shop in an apartment complex in Ilsan about two years ago. She was doing well until recently. But her business is suffering a drop in sales after several coffee shops opened nearby.

“You know it may look quite easy to run a cafe. But it’s really a tough job. It was still okay when I saw a steady rise in sales. But things are obviously becoming worse these days due to the increasing number of coffee shops nearby,” Lee said. “Sales and margins are falling. I am at a point where I should determine whether to continue it or not.”

She said starting a coffee shop now has many potential pitfalls.

“Prices of beans, milk and other ingredients are rising, while newly-opened shops are selling their coffee prices set too low. Opening a coffee shop became a lot riskier,” she said.

“I’m a regular customer of a small cafe nearby my house which is independently run,” said Kwon Ji-hye, a secretary of a law-firm living in Seoul.

“This is because those kinds of cafes offer drinks at more reasonable prices, compared to large coffee chains. For about 2 years, more than 15 cafes have opened in this neighborhood and the prices of beverages at each are more or less the same.”

Kwon thinks competition is unavoidable since cafes are springing up everywhere while the number of customers remains the same.

“It’s good for me, as a customer, to pay less for a cup of coffee, but every time I happen to see coffee shops newly opening in this district, I indeed doubt if the owners will be able to make big profits,” Kwon said.

“No one can run a business with serious doubts. I mean, obviously, the owners open their shop because they think they are going to be able to earn a lot of money.”

Yim Chang-bin, a 30-year-old office worker in Yeouido pointed out that there are too many coffee shops in Seoul, and of course, in the neighborhood where his company is located.

“I was upset a few months ago, because one of the restaurants I often went to for lunch was shut down and had a banner on the front door saying a franchise café would soon open in its place,” said Yim.

“I said ‘Again? No kidding!’ to myself as soon as I saw the banner at the time. There is a Starbucks on the corner in front of my company, and at a short distance of only 200 meters, there is a branch of Coffee Bean and other franchise cafés such as Pascucci, Café Artisee and Hollys Coffee. I honestly don’t understand why we need to have so many coffee shops in this area.”

Yim said he understands that cafes are a popular business these days, but it is apparently causing cutthroat competition.

“Customers are happy now because prices are low, but who knows whether there will be ‘price-fixing’ that triggers purchasing problems for customers?” Yim said.

Hijab is at a 'safe place in Amman', government confirms

8 Innovative Tips for Selling Your Home Fast this 2020

Guidelines for Selling Your Used Car