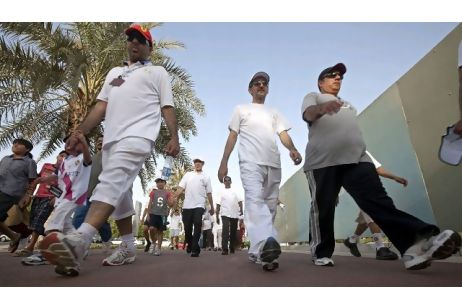 Older people who take a short walk just four times a week reduce the risk of an early death by a staggering 40 per cent.
Each walk only needs to be a 15-minute stroll in the open air to give them a better chance of extending their longevity by a few years, say Italian researchers.
Allowing for a host of other factors from smoking to diet, the walking pensioners had a 40 per cent better survival rate than those who did not, they found.
For ten years, medical experts monitored over 200 residents of an old folks’ home. Their average age was 80 and every aspect of their lifestyle, health and habits were noted.
This included their mental state, their diets, their weight, whether or not they smoked or drank coffee or were depressed, for instance. None had cancer or other terminal illness.
Most (around 80 per cent) of the subjects were physically active said the researchers from and other health organisations based in Rome.
During the decade of study, two in three of the volunteers died, they told the journal Maturitas, allowing them to look at the differences between them and the survivors.

They reported: ‘Over-all survival was highest for subjects walking in the open air four times a week for at least 15 minutes in comparison to subjects walking less than four times a week.’
Walking is obviously an easier form of exercise for older people to take up but it also has the effect of holding back heart disease, stroke and other likely causes of death in the elderly.
The fresh air and exercise can increase the efficiency of the immune system to ward off viruses, strengthen bones and reduce obesity.
It can also lead to better physical health which in turn can mean a reduced risk of injuries from falls too.
There are also healthy side effects. Old folk who walked regularly were also more likely to eat healthily and less likely to be depressed.
Although the figures were adjusted to take these factors into account, it does suggest that encouraging pensioners to walk more would have a variety of benefits, the researchers said.
Previous research has found walking speed may be a predictor of longevity.
Researchers at the University of Pittsburgh, who assessed 36,000 people over 65, found those who walked slower than 2ft per second (1.36 miles per hour) had an increased risk of dying, while those who walked faster than 3.3ft per second (2.25 miles per hour) survived longer than would be predicted by age or gender.
Meanwhile, researchers from Boston Medical Centre who studied people in their early 60s for a decade found those with a slower walking pace were 1½ times more likely to develop dementia.
Slower walking speed was associated with fewer grey cells (neurons that carry out most of the brain’s processing) and poorer performance on memory, language and decision-making tests.
ref: http://www.dailymail.co.uk