Japan nationalists land on isle at heart of row with China 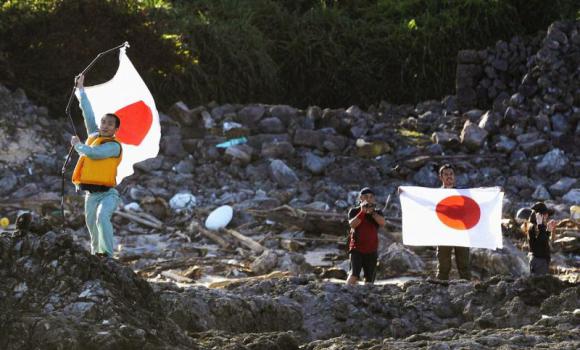 EAST CHINA SEA: Several Japanese nationalists landed on Sunday on a rocky island in the East China Sea at the heart of a territorial row with Beijing, a move all but certain to fan anger in China and worsen ties between Asia’s two biggest economies.
Tokyo and Beijing have been feuding for decades over the island chain, known as the Senkaku in Japan and the Diaoyu in China, near potentially huge maritime gas fields.
Tensions flared last week after seven of a group of 14 Chinese activists slipped past Japan’s Coast Guard to land on one of the uninhabited isles and raise a Chinese flag.
Japan, keen to avoid a rerun of a nasty feud that chilled economic and diplomatic ties in 2010, deported the activists within days, but the dispute still rankles.
The renewed maritime tension with China has parallels with Beijing’s other recent tangles with Southeast Asian countries over rival territorial claims in the South China Sea.
China’s expanding naval reach has fed worries that it could brandish its military might to get its way.
Relations have long been plagued by China’s bitter memories of Tokyo’s past military occupation and Tokyo’s concerns about Beijing’s rising clout.
On Saturday, China urged Japan to “stop the action that seeks to undermine China’s territorial sovereignty” over the islands.
But in a tit-for-tat landing, about nine of a group of more than 100 Japanese who sailed to the island chain swam ashore early on Sunday to one of the islets and waved Japanese flags.
Three Japanese Coast Guard vessels were nearby, a Reuters TV journalist on board one of the group’s boats said.
The nine activists later swam back to their boats and were being questioned by Japanese Customs officials.
Japan’s government had denied the group permission to land on the islands, which it leases from private Japanese citizens.
“This is a way of saying to not mess around,” Toshio Tamogami, a leader of the Japanese group, said before the flotilla set sail on Saturday.
The flotilla includes several members of parliament and local lawmakers.
“We hope to convey … both to China and the Japanese people that the Senkaku are our territory,” Tamogami said.
The Sino-Japanese row has intensified in recent months since the nationalist governor of Tokyo proposed the Tokyo Metropolitan Government buy the isles, prompting the central government to make its own bid to purchase them instead.
Japan’s ties with South Korea, where resentment over its 1910-1945 colonization still remains, have also frayed since South Korean President Lee Myung-bak visited an uninhabited island claimed by both countries.
Prime Minister Yoshihiko Noda, his ratings in tatters ahead of an election that may come soon, faces domestic pressure to take tough stances in the rows with Japan’s neighbors. This is despite their deep economic links and efforts by Seoul and Tokyo, both close US allies, to forge closer security ties.