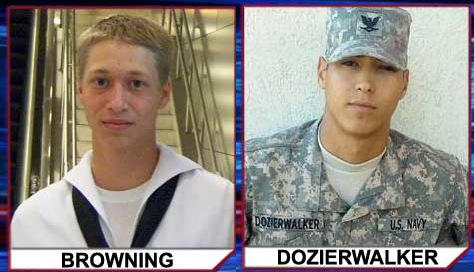 On Tuesday, U.S. sailors Christopher Browning and Skyler Dozierwalker were formally charged by Okinawa prosecutors for the rape of a young Japanese woman on October 16th. The incident has prompted an angry backlash of anti-U.S. military sentiment from locals, who have long protested the involvement of troops in local crimes and location of bases near residential areas.
The two American men, both 23 years old, admitted to Okinawa police their involvement in the sexual assault and injury of the unnamed woman several days after being taken into custody. Prosecutors say they have filed additional charges against Browning for robbery after he was found to have taken 7,000 yen (approx. $87) from the rape victim’s purse. Dozierwalker, from Muskogee, Oklahoma, and Browning, of Athens, Texas, are understood to have been drunk when they attacked the woman sometime between 3:40 AM and 4:30 AM on October 16th. They were arrested by police that afternoon at their off-base hotel, where they were making their last preparations to be transferred to Guam later that evening.

In addition to apologies and promises of cooperation in the investigation in the days after the incident, the U.S. military issued a strict 11 PM to 5 AM curfew for all troop currently in Japan. This matter has been brought into question once again, as on Friday of last week another U.S. serviceman was accused of breaking into an apartment and punching a Japanese teenager who lived there after leaving a bar while drunk and angered. He was well within violation of the curfew, and was taken to a military hospital for injuries after jumping out of the apartment window. He is also being questioned by local police this week over the accusations.