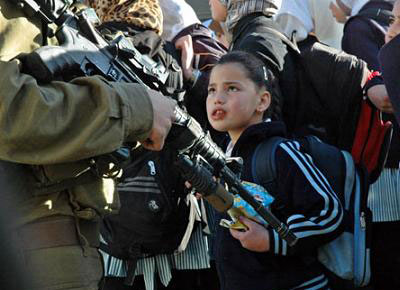 Israeli veterans have spoken out, describing a degrading culture of abuse and harassment of Palestinian children in the West Bank and Gaza. A report containing 30 veterans’ testimonies details numerous cases of violence committed by Israeli soldiers.

The report was released to world media on Saturday by Breaking the Silence, an organization made up of Israeli army veterans formed in 2004. They compiled more than 850 accounts from current and former Israeli soldiers describing abuses they committed or witnessed.

The investigation seeks to serve as “a witness to the ongoing decline of the military system into increasing immorality.”

“The words of the soldiers included here constitute an urgent call to Israeli society and its leaders: We must foster a serious discourse regarding the price of military rule of the Occupied Territories,” said the report.

A number of reports pertain to the detention and abuse of minors who pelt Israeli soldiers with stones and the imposition of Israeli control in occupied areas.

A first sergeant in an armored corps unit described his job as “population control,” in a testimony entitled “What is that job, really?” His unit would enter Palestinian villages on a daily basis to “make their presence felt” and to show the local residents that the area did not belong to them.

“A patrol goes in, or two patrols, two Hummers secured by a jeep, and raise hell inside the villages. A whole company may be sent in on foot in two lines like a military parade in the streets, provoking riots, provoking children,” said the first sergeant.

He said that his commander’s aim was to “grind the population down” so that they would not even think of throwing stones at their occupiers.

‘Whoever is slow to run gets beaten up’

One testimony describes in detail a camouflaged ambush on Palestinian children in Qalandiya in the West Bank following a riot. The platoon corned the children and beat them with wooden clubs as they tried to escape.

“People were made to fall to the ground, and then the soldiers with the clubs would go over to them and beat them. A slow runner was beaten, that was the rule,” said a first sergeant in the Engineering Corps.

According to the sergeant such ambushes were carried out about four or five times sometimes on the same children. The aim of the exercise, the sergeant said, was to discourage the children from throwing stones at the Israeli soldiers, but he did not believe it had any effect.

The report documents numerous cases of children under the age of 16 being taken into custody, blindfolded and deprived of food and water.

A first sergeant from a Paratroopers Brigade who regularly took children of 12-14 years of age into custody for attempting to cross the border into Israel said they were taught to treat the children not as small children, but as assisting terrorists.

“The intelligence officer saw two soldiers beating one of the detainees. I think they were about 16 years old, if I remember correctly,” he said.

‘We’d lost all sense of mercy’

Another veteran described how his troop would trash shops and buildings because they were bored, purposely triggering riots.

He related an incident where Israeli soldiers waiting for civilians outside a mosque began to fire rubber rounds in order to spark a riot. He said that if Arab children threw stones at them they would use them as human shields.

“You know how badly beaten they get? You catch him, push the gun against his body, he can’t make a move, he’s totally petrified. He only goes: “No, no, army.” You can tell he’s petrified.”

In response to the report the Israeli Defense Forces (IDF) said that Breaking the Silence had revealed its true intentions “to generate negative publicity regarding the IDF and its soldiers, rather than facilitating a proper investigation.”

“As a matter of policy, the organization chooses not to provide the IDF and other relevant bodies with the critical material necessary for investigation. By compiling testimonies over long periods of time and refusing to provide additional detail, [Breaking the Silence] proves its true intentions – rather than facilitating proper investigation, the organization seeks to generate negative publicity regarding the IDF and its soldiers.” the IDF told The Weekend Australian.

Breaking Silence member Yehuda Shaul hit back at the IDF, saying “over 70 of our testifiers have come out publicly with their names and identities revealed, and I’m one of them.“

“If the IDF was interested in investigating our claims, we probably would have already been summoned to interrogations,” concluded Shaul.