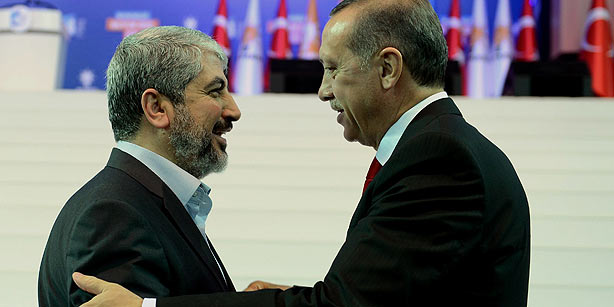 Israeli officials contacted Turkey through two channels before the truce and requested that the country extend efforts towards a cease-fire, Meshaal told Turkey’s state-run Anatolia news agency in an interview on Friday.

“Efforts by Turkey and Egypt yielded results,” he said. “The cease-fire has been reached in its current shape thanks to efforts by Turkey, Egypt and Qatar. With the cease-fire some demands of Palestinian people have been fulfilled and border gates were opened,” he added.

Turkish-Israeli relations collapsed after eight Turkish nationals and one Turkish American were killed when the Israeli navy attacked an international aid flotilla trying to break an Israeli blockade of Gaza in May of 2010.

Ankara wants an official apology from Israel for the raid and calls for the lifting of the Gaza blockade, but both demands have so far been rejected by the Israeli government. With tensions increased, Turkey has expelled the Israeli ambassador and suspended military agreements it had with the country.

“We were in contact with Turkish officials till the last moment,” he said, underlining the Turkish contribution to mediation efforts.

While Egypt served as the mediator in the indirect negotiations, Meshaal noted that the United States and the European Union wanted Egypt and Turkey to be mediators in the conflict.

This meeting for Gaza was an indication of solidarity in the religious community, Meshaal added.

Noting that Erdo?an exerted great effort for an end to Israeli attacks on Gaza, he said Erdo?an’s telephone conversations with US officials were particularly effective.