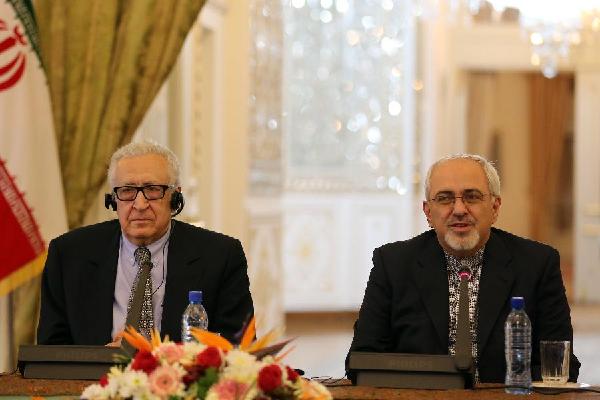 Iranian Foreign Minister Mohammad-Javad Zarif (R) and UN-Arab League joint special representative to Syria Lakhdar Brahimi attend a press conference after their meeting in Tehran, capital of Iran, on Oct. 26, 2013. Zarif and Brahimi called here on Saturday for a political solution to the long-running crisis in the Arab country.

(Xinhua)TEHRAN, Oct. 26 (Xinhua) — Iranian Foreign Minister Mohammad- Javad Zarif and UN-Arab League joint special representative to Syria Lakhdar Brahimi called here on Saturday for a political solution to the long-running crisis in the Arab country.Brahimi, who arrived in Tehran on Saturday, expressed hope that with the help of Syria’s neighbors, “we could mobilize all parties to solve the Syrian issue.””What is happening in Syria is a humanitarian crisis,” said Brahimi, adding that “crimes against Syrian people by all sides should be stopped.”Also, Zarif said “conflicts in Syria can only be solved by the Syrian people … and we can only offer assistance” for political solutions.About Iran’s participation in the upcoming Geneva II talks on Syria, Brahimi said participation of Iran is “natural and necessary.

“”If invited to the Geneva II talks, Iran will attend the conference with the aim to find a political solution” to the Syrian problem, said Zarif.On Oct. 7, U.S. State Department spokeswoman Marie Harf said the United States might agree with Iran’s participation in the conference if Tehran backs the “Geneva I Communique,” which called for a transitional government in Syria.The United States and some Western countries have accused Iran of supporting the government of Syrian President Bashar al-Assad in the civil war and called Iran “part of the problem.

“In June 2012, powers and some neighbors of Syria, including Iraq, Turkey and Persian Gulf states, agreed in Geneva on a transitional government in Syria as a means to achieve a diplomatic solution to the Syrian crisis.Later, Geneva II talks were suggested by Russia and the United States in an attempt to develop mechanisms to implement earlier agreements.Iran has said that it will not accept any precondition to its attending the Geneva II meeting.Being the main regional ally of the Syrian government, Iran has condemned foreign intervention and “terrorists’ involvement” in the Syrian conflict.