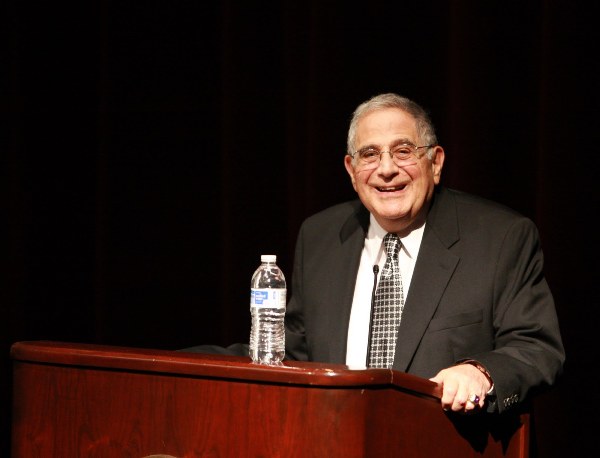 Jack Shaheen is the author of Reel Bad Arabs, a former CBS News consultant on Middle East affairs and Professor Emeritus of Mass Communications from Southern Illinois University at Edwardsville. He is a professor, author, and professional consultant for films such as Syriana and Three Kings. Shaheen has served as a consultant with film and TV companies DreamWorks, Warner Brothers, Hanna-Barbera and Showtime. Dr. Shaheen, an Oxford research scholar, is the recipient of two Fulbright teaching awards. He holds degrees from the Carnegie Institute of Technology, Pennsylvania State University, and the University of Missouri. He has appeared on national network programs such as CNN, MSNBC, National Public Radio, Nightline, Good Morning America, 48 Hours and The Today Show. We talked to him online about his life experience. We recently talked to him via Skype, and this is the transcript of our conversation :

Tell us something about yourself, early age, schooling and college life?

I have Lebanese roots. I was born in the United States in Pittsburgh. I grew up in a very small steel town right outside of Pittsburgh. I went to college in the Greater Pittsburgh area, served in the military. After the military, I went to work for the United States government in Germany. I lived in Germany for three years, came back, earned my Masters and PhD. In 1969, I started teaching core courses in mass communication, had nothing to do with the Middle East at all, and while I was teaching at the university, my children caught my attention to some really ugly Arabs in a children’s cartoon. That was in the mid 70’s, and at that time I had a Fulbright and I taught there from 1974 to 1975 and I traveled extensively with my family throughout the Arab world. When we came back to the states, I decided to look at how Arabs were being portrayed on American television and nothing had been written,it was all literature, which in a way was good because it forced me to look at how other groups had been projected in American culture, so I found all these books about Asians and Jews and Hispanics and blacks and it was a tremendous resource in terms of helping me look at Arabs, but none of those authors in those texts they had never gone to the source. When I began looking at how Arabs were being portrayed in television, I decided not only to document it, but to go to the people responsible for the images. My first book, The TV Arab, which came out in 1984. I spoke to about 30 different television executives, writers, producers, directors, and I had to meet with them, which was very, very difficult because of the prejudices at the time, and then I incorporated their comments into the body of the text. And then, you know, from there it’s sort of history, I kept writing about Hollywood, and editorials and so forth, etc. etc. Until now, there is an entire body of literature, not only from myself, but from other scholars from the first time were picking up on what I initially discussed.

Your archive now contains huge amounts of  material, consisting of television programs (including comedies, dramas, cartoons, as well as commercials). Also included in the archive are movie/TV scripts, law cases, books and magazines, as well as toys and games. We can say that since childhood people begin to acquire prejudices about Arabs and other marginalized people. It did not start with 9/11? Is it the heritage of orientalists?

Well, I think we always had prejudices against the evil enemy, other people with dark skin, you know, the far East, whether they were Asians, Arabs, and blacks. The only difference is that beginning in the 40’s after the state of Israel was created, maybe even in the early 50’s, the images of those other groups (Asians and blacks, particularly blacks with the civil rights movement) began to change dramatically. Civil rights act is 50 years old when wives were being beaten, mistreated, and denied admission into schools, there was a heightened awareness, I think, in that time in terms of the images of blacks and that spilled over to Asians and Hispanics, and even Jews after World War II, but the only group that remained in the forefront that continued to be vilified, and there was even an escalation, were Arabs and Islam.  And there are many reasons for that. One is that it was easy and there was no pressure group at all, and no one complained. Arab governments didn’t realize the impact and still don’t realize the impact of these images, there’s still a long way to go. American Arabs weren’t organized, there was no need to, because we blended in so beautifully as Americans. Also, most American Arabs are Christians and the stereotypes didn’t concern us. The stereotypes demeaned the Arabs and Muslims that are over there in the Middle East. And there was a lack of an Arab American presence, no producers, no writers, no directors, and so we were not creating our own images so to speak. I think there was a myth that if you created a good Arab you were a pro-Arab and anti-Israel, as ridiculous as that sounds. A producer told me that once: “You know, Jack, I’d really like to have a heroic Arab character, but I think I’d be labeled as anti-Israel”, he says, “and I’m not, I’m pro-peace!” I said: “I understand, you don’t have to say anything.” So we had all of these horrific images having stockpiled long before 9/11. What 9/11 did was three things. One, it focused on American Arabs and American Muslims as a fifth unit, as a cell as terrorists, and all of a sudden me for the first time ever. We were indivisible prior to 9/11, and now all of a sudden we were identified with Al-Qaeda. And then you had the creation of Fox news and Rupert Murdoch had this anti-Arab agenda which spilled over to the Fox television network in shows like 24. 24 was successful in vilifying Arabs; then all of the other networks began to copy 24. And it was shows like Sleeper Cell, and series, and all of these TV shows came out of the woodwork vilifying American Arabs and American Muslims. Suddenly, the enemy sort of shifted to Muslims, all Muslims. Not that Arabs still weren’t in the mix, they were, but Hollywood expanded to Islam, etc. And so that’s what 9/11 did.

What is the role of the media when it comes to preserving the image of the Western superiority?

I think you know in any country, if you’re in Egypt, for example, and you’re a filmmaker, you’re going to show that Egyptians are very good people. It’s always natural, it’s a business, and so the heroes have to be American. If they weren’t American, no one would watch TV or go to the movies. I think one of the keys  that I talk about, I’d love very much to come back to Dubai at their film festival this year. You know, I showed my Reel Bad Arabs documentary there several years ago, and I need to come back and just talk about the role of young Arab Americans and other Arab filmmakers, and how they can alter the stereotypes, and what can be done, and what should be done, and the role that film festivals play, and can play, and should play in changing the images. I haven’t really lobbied to do that, I’m so busy. But it would be good to do that, it’s one way to help resolve the problem, I think. I have more respect for people in Dubai that run the festival, I mean they are really good. I remember Abduhamid Juma, one of the organizers, he’s quite a man. That’s one way to go about changing the stereotypes of Arabs in the Western Media.

What about the image of the westerners in the Arab Media?

Well, you know, I’ve never really looked at how we in the West are portrayed in the Middle East. I know from living in Lebanon and living in Jordan, they practically don’t exist in cinema, occasionally they pop up but they’re not vicious terrorists or rude people. Arab editorial cartoons are critical of the US government, at times, but that’s fair game. Arab media DO NOT vilify the American people. The opposite is true here in the West, we vilify people and their religion in all forms of popular culture.

How do the stereotypes and prejudices of Arabs, spread by the media, reflect on people’s behavior towards them?

I think what the stereotype does, it has an influence on Arabs, and American Arabs, and American Muslims, it takes away their humanity. It is also particularly here in the states, it takes them out of their framework, they are afraid to speak up, afraid to get involved politically, ashamed of their heritage to some extent – some people, not all of them. And that has a profound impact on public opinion, you know, it’s like when people find out I’m an Arab Christian, it’s okay; but I’m not so sure if I went to a mosque and prayed there, how I might be perceived. I’m sure it’ll be okay but I don’t think it’ll be quite the same thing. And of course, public opinion has an impact on policy and so all of the political leaders like President Obama think “Homeland” is a great TV series, well if I met with the President I can explain to him that it’s a very slick anti-Islam show/series. It’s done in such a way that is not to appear to be anti-Islamic, but you know historically we think that they are above embracing stereotypes, well educated people embrace them just as much if not more than someone who’s not educated, because they think “I’m educated and I know the difference,” so there’s an ego there and there’s an attitude there that forces them to think they’re above thinking in terms of stereotypes, and so it’s very very dangerous. And even today, whenever there’s an act of shooting (unfortunately there’s so many shootings in high schools), every time something like that happens, we all hold our breaths and pray that it’s not an Arab American or a Muslim American. If it’s a Muslim American, his or her heritage is going to be revealed by the press, whereas in all of these other instances, we don’t know if the shooter is a Catholic, a Protestant, a Jew, we have no idea, nor should we know – that persons religion or ethnicity should not be a part of the story. So that danger still exists and there are special interest groups in the country that need to be exposed. There is one group that needs to be exposed – I think if I come to Dubai or go to Doha or somewhere, we have got to focus on that group. It’s called the Clarion Fund. They have done horrible and vicious anti-Arab and anti-Muslim documentaries that made people fear Islam and they’re brilliantly made and produced, it’s the best propaganda I’ve seen since Hitler and his propaganda ways; they’re absolute geniuses. The Clarion Fund and the people behind it need to be exposed and no one’s doing anything about it which frustrates me. You know, I’m an academic, I’m 78 years old and by myself. I want someone to get up and after the Clarion Fund to expose them for what they are not, even Al Jazeera is taking them on.

Special thanks to Mohammed M’nasria 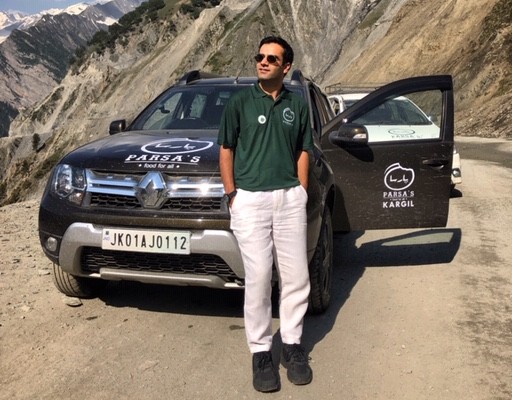 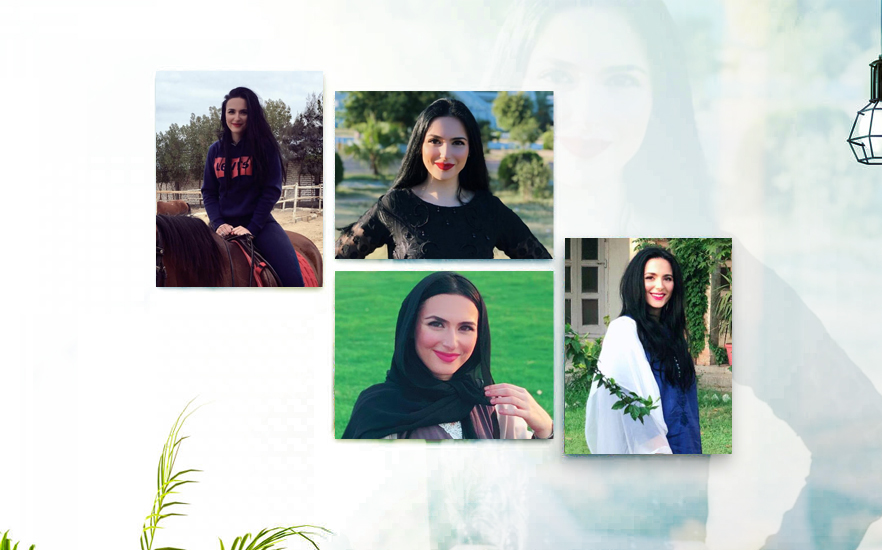 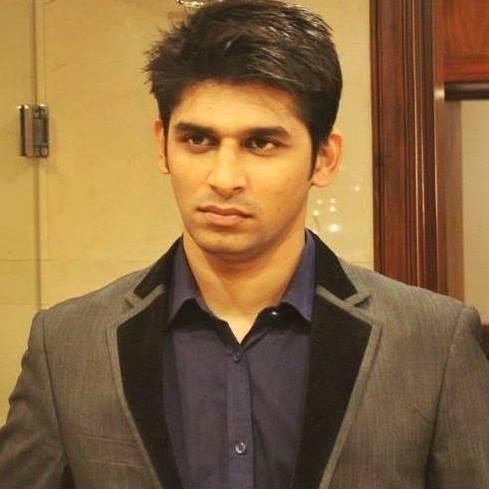 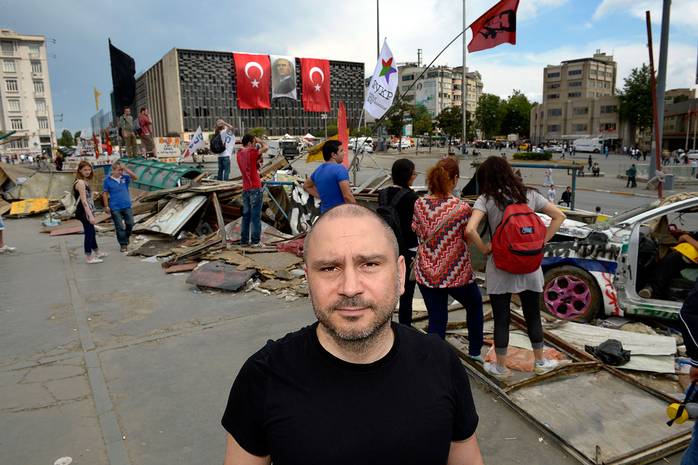