International Industrial Workers of The World and COVID-19 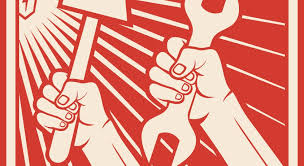 Industrial Workers of The World and Social Distancing

While social distancing and self-isolation are hailed as the only effective way besides rapid testing to contain COVID-19 in times when the vaccine does not exist, staying home is not a luxury many of us can afford. Most of the lower middle class and poverty-stricken class whose survival is dependent on daily wages cannot find work due to panic that is caused in the local and international business sectors.

According to Federal Reserve Bank St. Louis, By March 21 unemployment in the US rose to 3.3 million while according to Bloomberg, 30 to 40 million Americans could lose jobs as companies around the country are practicing layoffs. According to OpenTable, Restaurants around the world saw a 100% decline in diners’ activity.

In China where infection cases near to zero, the true wreak havoc caused by the virus is becoming apparent. While Travel and tourism declined 80 percent in a single month due to lockdown procedure, China’s GDP Growth according to Bloomberg will shrink only 0.7 in best case scenario, that is, everything gets under control in the first quarter and factories are mobilized around the world. But that is being optimistic.

As if the US trade war with China wasn’t enough, this epidemic has been a reality check to most multi-national companies as the lockdown of Hubei province had the manufacturing supply chain disrupted with companies scrambling to find spare parts for the production of cars, drugs, widgets and solar panels. In response, companies such as Apple and Honda had to close down retail centers around the world.

Pharmacies in part of Europe reported that they couldn’t get surgical masks because they’re all made in China. It became apparent that China as a Global manufacturer is an integral part of the world economy and supply chain but that sentiment among investors is long gone. COVID-19 has done irreversible damage to that image of China as put by Vladimir Signorelli, head of Bretton Woods Research, a macro investment research firm.

“Using China as a hub…that model died this week, I think,”

Investors and Companies had been searching for alternate countries that are closer to home than China. Mexico is getting popular as such haven since it takes 5 days for shipment to reach New York. From China, It takes 40. Other than that, low wages which were an attraction for investors have been increasing and enactment of more environment restrictions on industries since active commitment to the Paris Accord is giving companies second thoughts. Finding another country is not as easy as logistics and tax rates always play an important part in deciding the alternate haven.

The fact remains; millions of employees will get hurt all around the world as markets face slump and local businesses get orders canceled due to reluctance of people to order things amid the outbreak and all services are halted. It means that products have been over-produced and have less demand that might result in the layoff of more Industrial Workers of The World. This fragility of jobs caused by uncertainty in the market is growing a sense of abandonment in the workers who were lead to believe that capitalism will be their savior in dire times of crisis. As that illusion shatters, what will be left of economies around the world by this virus will be scavenged by unemployed workers culminated into movements as we had first seen in 20th century in the aftermath of Great Depression. UN warns at the possibility of Global Recession worse than 2009 and with survival at the helm of these movements, the world may see the workers unite for job security and opportunity.

Tags: Workers of The World and COVID-19