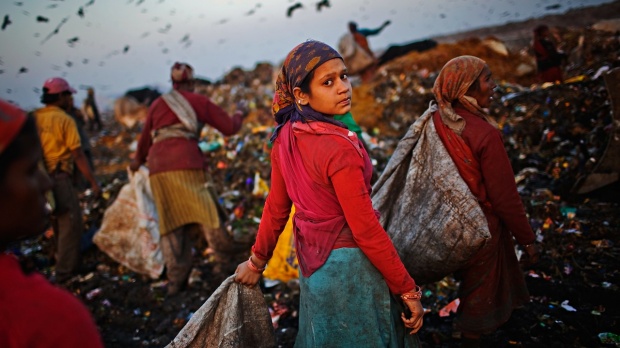 India wants to be a member of the United Nations Security Council and it wants to be a world power or regional power at the least. It is also delighted that its rate of economic growth is competing with that of China. India owes its image to its own media and at times even the foreign media, the festering wounds in India’s body politic are disregarded and a misleading image is created. Indian social fabric is in tatters if the statistics of rape, dowry death, female infanticide, farmer suicide, slum dwellers and poverty rate are considered. There are some other inherent flaws in Indian society such as the caste system.

India even today has a caste system, they have not been able to move on from the primitive religious classifications of Hinduism. In this whole caste scene, the lowest of the low are the Dalits, also known as the Untouchables. They are members of those menial castes which are born with the stigma of untouchability, they are outcasts, even falling outside the caste system which consists of Brahmin, Kshatriya, Vaishya, and Shudra.

They are considered impure, therefore physically and socially excluded and isolated from the rest of society. Very few have important government or military jobs, some days ago the Indian Foreign Secretary Sujata Singh, a Dalit was abruptly removed from her post much before her tenure ended.

Ever since the advent of Modi, there were underlying tensions between the Prime Ministers Office and the Ministry of External Affairs. Top sources relate that Modi felt she lacked the imagination to handle Indian foreign affairs with a more aggressive and multi-aligned approach.

The new Foreign Secretary S.Jaishankar is more to Modi’s liking due to his hawkish stance. S.Jaishanker’s father K.Jaishanker had hijacked India’s own Airliner IC-421 in 1984, he was also a strong proponent of India’s intervention in the East Pakistan crisis and was the main supporter of R&AW’s chief Kao in the creation of the guerrillas Mukti Bahini. Later he had become the Chairman of the Kargil Committee in 1999. In short, S.Jaishanker was rewarded for obvious reasons and a Dalit was sidelined.

Dalits are mostly humble in nature having been the downtrodden for centuries, their nature is not suited for the RSS ideology of the BJP currently in power.They are not antagonistic enough towards other minorities or neighboring countries so they are not fitting into the Hindutva dream.

There are much worse fates Dalits face even in the 21st century, the profession forced on them due to their lowly caste is that of manual scavenging. They face violence, eviction and wages are withheld if they do not empty private and public latrines for the rest of the castes.

This practice of forcing low-caste people in India to remove accumulated human waste from latrines is continuing despite legal prohibitions. In a report released recently, the Human Rights Watch based in New York investigated the practice of manual scavenging, collection of excrement from latrines by hand.

Now a campaign has been organised to get Indian government and Indian public to recognize the human rights of these miserable beings, this is the National Campaign of Dalit Human Rights.

India’s Constitution abolished untouchability, the superior castes could no longer legally force Dalits to perform any polluting occupation, but notwithstanding this ruling sweeping, scavenging, and leather work are still the job of scheduled castes. They are meted out physical abuse and social boycott if they refuse to perform the demeaning task.It is just another type of slavery and bondage.

According to information circulated by www.ncdhr.org.in.

In 38% of government schools Dalit children are made to sit separately while eating.
In 20 % schools, Dalits children are not even permitted to drink water from the same source.

A shocking 27% of Dalits are prevented from entering police stations and 25% from entering ration shops. 33% of public health workers refuse to visit Dalit homes 23% of Dalits still do not get letters delivered in their homes.

Segregated seating for Dalits was found in 30% of self-help groups and cooperatives, and 29% of panchayat offices. In 14% of villages, Dalits were not permitted even to enter the panchayat building. In 12% of villages surveyed, Dalits were denied access to polling booths, or forced to form a separate line. In 35%, Dalits were denied entry into village shops. They had to wait at some distance from the shop, the shopkeepers kept the goods they bought on the ground, and accepted their money similarly without direct contact.

In 10 to 20% of villages, Dalits were not allowed even to wear clean, bright or fashionable clothes or sunglasses. They could not ride their bicycles, unfurl their umbrellas, wear sandals on public roads, smoke or even stand without head bowed. Restrictions on temple entry by Dalits average as high as 64%, ranging from 47 % in UP to 94% in Karnataka.

In 48.9% of the surveyed villages, Dalits were barred from access to cremation grounds.
In 25% of the villages, Dalits were paid lower wages than other workers. They were also subjected to much longer working hours, delayed wages, verbal and even physical abuse, not just in ‘feudal’ states like Bihar but also notably in Punjab. In 37% of the villages, Dalit workers were paid wages from a distance, to avoid physical contact. In 35% of villages, Dalit producers were barred from selling their produce in local markets. Instead they were forced to sell in the anonymity of distant urban markets where caste identities blur.

India is not what it would like or pretends to be, striking poverty, unemployment, diseases, deprivations, illiteracy monopolize it more than its billionaires, military arsenal or economic growth. India accounts for one-third of the world poor, people living on less than $1.25 (about Rs 65) per day, says a World Bank report on poverty in May 2013.

Recently, opposition party AAP gave BJP complete defeat in Delhi, it has emerged as a party of the poor, lower castes like the Dalits and the minorities ie Muslims, Christians etc. In Delhi, there are many contradictions and the real battle between the classes is staring in the face, this made it the perfect stage for a BJP defeat.

A Prime Minister that wears a Rs.10 lakh suit to greet Obama on his visit to India probably didn’t go down well with the poor. There is a huge slum next to the Prime Minister’s residence or even right behind the World Health Organisation offices. The Indian dream clashes with the aspirations of the daily wagers, jobless, rickshaw-pullers and rag pickers.

AAP swept 67 out of 70 seats in an unprecedented landslide victory, it was a major embarrassment for Modi on whom the entire BJP campaign in Delhi was centered, Arvind Kejriwal has now been sworn in as Chief Minister of Delhi.