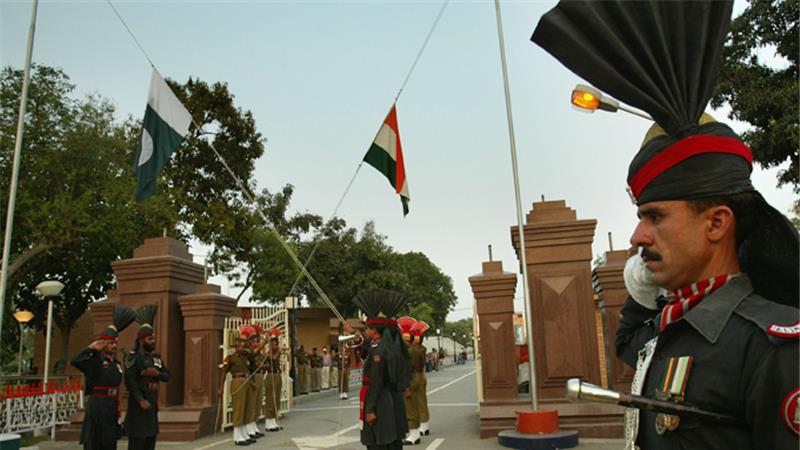 The year 2016 started with an ominous warning from Indian Defence Minister Manohar Parrikar that “The world will see results in the next one year.”

This indirect threat was given to Pakistan on 16th January, after the Pathankot airbase terror attack, even though Kashmiri Mujahideen claimed responsibility for it.

India wanted Pakistan isolated, failing to do so it has now threatened Pakistan with serious consequences within a year.
Parrikar went on to say that ‘Pakistan’s inaction’ against the alleged attackers of Mumbai and Pathankot has exhausted his country’s ‘patience’.

On another occasion, he also said that ‘those who attacked us would feel pain, the place and type of response would be our choice.’

Recently, on 5th February, Parrikar announced that India will “surely” teach a lesson to the mastermind of the Pathankot air base attack and India “is losing much of its patience”, Parrikar said the country will give tit-for-tat.

He also claimed the “pushers” of the attacks were in Pakistan, refusing to disclose details. Asked why India has not launched a counter-attack against Pakistan after the Pathankot incident, Parrikar was quoted as saying that the time will be chosen by India.

In December, the Indian PM, Narendra Modi paid a surprise visit to Lahore. It seemed to have been a business visit but it left the world optimistic that terms between both countries seemed to have improved.

There has always been a perceptible pattern to Indo-Pak relations, whenever things seem to improve, they are only about to get much worse. Probably, Modi, s Lahore visit may also have been to seem like a peace-loving leader just before the situation was planned to get worse.

Things have gone from bad to worse since the advent of Narendra Modi, s government, and since the beginning of this year India has gone on the offensive.

The Indian National Security Advisor, Ajit Kumar Doval has often mentioned in his speeches that the Indian foreign policy should be re-geared to ‘destroy Pakistan’.

In one of his papers titled ‘Internal Security — Need for Course Correction’, he writes ‘the Indian security establishment has become lax in its attitude towards Pakistan.

Indian foreign policy must re-gear itself to go on the offensive against its enemy Pakistan by funding, arming, training and directing non-state actors to wage a campaign of chaos within Pakistan by exacerbating existing sectarian and ethnic differences through violence.

India will never be secure until Pakistan is destroyed, China is silenced, and Muslim and Sikh anti-state groups in India are forever extinguished.’

As NSA, Doval has unleashed a nexus of proxies against Pakistan, he has no compunctions and has orchestrated some heinious terror attacks.

He went on a trip to Syria, where he acquired a complete list of Daesh militants, later on he re-engaged TTP militants and arranged a TTP-Daesh meeting at the Indian consulate in Kandahar to establish a nexus.

Both these outfits are two faces of the same coin, they are known as Kharijis, those who mis-interpret and misuse religion for their own cults, which always provide mercenaries for terror attacks by brainwashing their followers.

Such mercenaries are used by India for its unconventional war with Pakistan. It is unclear whether Doval, s meetings with Daesh  in Iraq and Syria were in the knowledge of CIA, but the US Defense Secretary Chuck Hagel is on record admitting the Indian role in financing terror in Pakistan.

Meanwhile, ever since Parrikar,s initial warnings, terror attacks took place, in Quetta, Jamrud and Charsadda. In frustration, a split faction of the TTP is attacking ‘soft targets’ like children in educational institutions, it has lost its infrastructure and has been smoked out of its hideouts in Pakistan.

It is making use of ‘sleeper cells’ to carry out cold-blooded terrorist attacks, their leader Umar Khurasani has threatened to kill children in schools and college students. After Parrikar, s latest threat in February, a bomb attack took place on security personnel in Quetta.

It seems like the perpetrators have planned a ‘series’ of terror attacks to leave no breathing space, it seems to be a last-ditch attempt to make the TTP proxies deliver.

India has twelve consulates in Afghanistan, the handling and training of terror attacks is done from there. Indian proxies TTP have been on the run since a year, hiding away in Afghanistan.

Since Pakistan Army started the Zarb-e-Azb military operations, terror attacks went down by 85% all over the country.
Balochistan is much more peaceful, Karachi is returning to normal.

The number of those seeking Indian and RAW assistance has shrunk, India has been mostly unsuccessful in exploiting Pakistan, s fault-lines. India is definitely annoyed over its failure, its terror proxies seem to have a renewed impetus and the threat-level is high.

India cannot afford to have a conventional war with Pakistan, its only viable option is Cold-Start, even now the Indian army is about to initiate massive military maneuvers.

However, Pakistan, s tactical weapons like the Nasr ballistic missile would effectively deflect Cold Start, these weapons are harder to contain than other nuclear weapons. Even the U.S. would like Pakistan to stop the manufacture of tactical nukes, these enhance Pakistan, s defense as well as reinforce China and isolate India.
India, s only option to stop Pakistan, s progress is an extended, high intensity proxy war.

This is why Parrikar talks about results in the next ‘one year’, India intends to increase terror attacks in Pakistan.

India started this ‘ one-year terror offensive’ against Pakistan with the intent to disrupt and subvert the China Pakistan Economic Corridor.

Pakistan,s regional role as a peace-maker irks India, the Kashmir freedom struggle has only accelerated and Pakistan flags are hoisted all over Indian Occupied Kashmir.

Along with a string of terror attacks, a slew of articles are being published on Western and Indian media to run down Gwadar and the CPEC by distorting facts and discussing the prospects of CPEC only partially, in a derisive manner.

The CIA does not want China to make use of Gwadar as a naval base and get access to warm waters. The U.S. is also feeling threatened as gradually, the CPEC project is nearing completion.
So, the U.S. and Indian lobby is on a mission to destroy the image and credibility of the CPEC with dis-information, creating confusion in the minds of the public.

The U.S. would like China to remain land-locked and contained, and Pakistan is not being of much help there, CPEC would strengthen the Chinese economy and give China its ‘String of Pearls’ dream.

India has wanted to cause irreversible damage to the state of Pakistan since its creation, it was successful to separate East Pakistan in 1971 with the help of its mercenaries, the Mukti Bahini, in this case it also had some geographical advantage as East Pakistan could only be reached by sea or over Indian territory from West Pakistan.

Today, in the same manner, India uses outfits like TTP or BLA to destabilise Pakistan, the BLA failed despite constant Indian funding and training, as the Pakistan army offered the rebels complete reprieve if they laid down arms. Not only that, the army developed Balochistan, built roads and schools, today the province is peaceful and out of the clutches of India.

The fact of the matter is that India does not want peace with Pakistan, it has still not accepted its existence. Pakistan has to be pro-active and make sure the terrorist sleeper cell network is dismantled, Indian-run terror bases in Afghanistan need to be neutralised, these days Afghanistan is providing India its strategic depth.

The TTP faces a possible split as the central leadership disowned the Charsadda attack, even a joint council formed last year was also dissolved after breakaway factions formed.

All these militant groups operate from the Afghan side of the border, closing borders could be a way to decrease these proxy terror attacks, even though it is a long and porous border, infiltration of terrorists could be greatly decreased. Afghan refugees living in Pakistan since decades provide cover for terrorist elements from Afghanistan, it is high time they are all sent back.

It remains to be seen how matters unfold by the end of the year, Pakistan definitely has to take steps to stop further terrorist attacks.

Note: Al-Rasub is not responsible for Writer personal opinion, facts and figures.