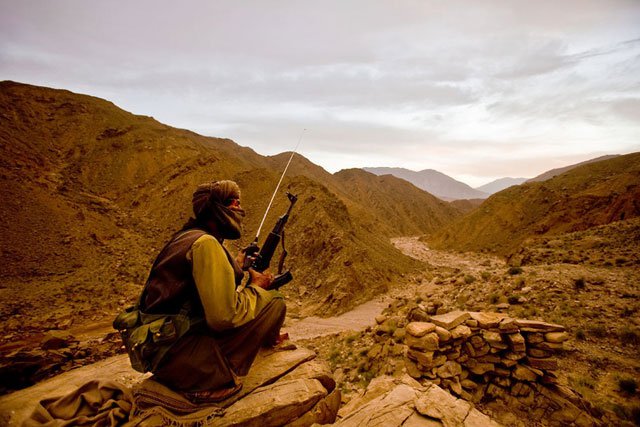 India has been actively pursuing a covert war doctrine in Pakistan since decades, Pakistan,s vast yet sparsely populated province of Balochistan was turned into a volatile region by employing proxies.

The Balochistan Liberation Army (BLA) was founded in 1999 and is the main faction, it was involved in terrorism, kidnapping for ransom and bomb blasts, Hyrbyair Marri is the leader of Free Balochistan Movement along with BLA and BLO.

Pakistan government was accused of not spending money on development projects in Balochistan and using provincial oil and gas reserves even though Gwadar and Ormara were being developed to bring prosperity and jobs for Balochis. The dissident tribal leaders were all provided sanctuary by India in places like Switzerland and London where they maintained a lavish lifestyle.
The Indian intelligence agency RAW provided weapons to the rebels and maintained mini-fortress type establishments for them. Some Pakistani television channels and newspapers were employed to provide the rebels a platform and spread dis-information.

Tarek Fatah, a Canadian journalist, has been one of the main champions of this fake movement abroad. An American, Professor Christine Fair has also been heavily involved in doing Balochistan propaganda, going hysteric and jingoistic in her accusations against Pakistan army, at times it borders on the ridiculous.

The methodology was to blame the Pakistan army for violence against tribals when in fact the army has never been deployed to control the Baluchistan scenario, only Rangers and other law enforcement agencies have been used to maintain law and order. Their aim was to try and involve the army and create a situation akin to that which was created in Libya. Hue and cry was raised about missing persons , actually most ‘missing’persons were those who had gone to join the BLA.

The plan was to deny Balochistan to Pakistan by creating an internal artificial mess and create hurdles in the development of Gwadar port and CPEC. The insurgency has greatly diminished in the last two years, nearly a thousand rebels have given up arms and vowed to mend their ways.

This year, Baluchistan province was way ahead of the rest of the country in celebrating Pakistan,s Independence Day, special events took place for three days and rallies were taken out.
In the past, these rebels were used by India to scare off investors and developers such as the Chinese, to sabotage Gwadar.

The rebels were previously misguided that the demographics of Balochistan would be upset with the advent of people from all over the world.

Now the Balochis have understood that their province would be a major beneficiary of the China-Pakistan Economic Corridor and it would soon become a hub of international trade.

For the first time, Pakistan has dealt with India aggressively over its proxy wars in Pakistan, evidence against it was presented in the United Nations and the latter feels cornered. The Prime Minister was in New York recently, he utilised the opportunity to expose India in front of the international community.
The Pakistani Representative to UN, Maleeha Lodhi accused India of “human rights violations in Jammu and Kashmir” and of “supporting and sponsoring Terrorism in Pakistan”.

This time Pakistan has handed over documentary evidence to the United Nations secretary general about India,s involvement in terrorist activities in Balochistan, Karachi and Fata.
India has been carrying out terrorism in Pakistan on a major scale.

Since 2013, India adopted three main routes to supply a huge quantity of explosives inside Balochistan. The first was the Makran axis, in which explosives reached Turbat through the Arabian Sea and were mainly supplied to the BLA and other Indian terrorist networks.

The second route was the Khuzdar Axis which was also accessed through the Arabian sea, the Indian proxy involved here was the United Baloch Army which was delivered explosives for terrorism in Quetta.

The third and most heavily used route was through the Afghanistan axis, India has its eight consulates, or rather terrorist bases in that country.

The weapons, explosives, landmines and suicide jackets were transported from Kandahar to Mastung in Balochistan, huge caches of these have been caught by law enforcement agencies.

So India had a vast and organised terror network to try and break off Balochistan from Pakistan, it is an old hand at this dastardly business as it was successful in breaking off East Pakistan in 1971.

The geographical factor helped it greatly in the division of Pakistan at that time, as East Pakistan was accessible to West Pakistan only through sea routes which traversed the Indian coastline. India has been carrying out terrorist attacks in Pakistan with great ease through these three main supply routes.

Now that the Pakistan government has presented detailed evidence to the United Nations, India,s Hindu nationalist government has tried to adopt overt tactics as its covert warfare in Balochistan has collapsed. The Balochi rebels are laying down arms as the government has decided to pardon them and they are out of India, s control now.

The new feeble Indian modus operandi is to get hold of a few exiled Balochis and parade them in front of its media in Delhi with concocted stories. The story that emerged in the Indian media was that a representative of BLO has been living in Delhi since 2009. The said representative Balaach Pardili read out a statement from BLO, s exiled leader Hyrbayar Marri and gave the impression that Marri would visit Delhi soon to request support from the Indian government.

The whole story fell flat when Marri announced he would never take assistance from India, nor did he have plans to visit Delhi.
He said “I have never sought help from them, nor will I in the future”. Marri even displayed willingness to have talks with the Pakistan government.

In sheer desperation, the Indians have completely exposed themselves, it just proves the authenticity of Pakistan,s dossiers presented at the United Nations.

The implications of India,s new bravado can be very serious and major world powers would pressurise it to stop its proxy games.
The U.S. has known about India, s involvement in terrorism in Pakistan since a long time, U.S. Defense Secretary Chuck Hagel once said, “India has always used Afghanistan as a second front against Pakistan. India has over the years been financing problems in Pakistan.”

Pakistan has been talking to senior Baloch interlocutors recently and the results are very encouraging, said the Interior Minister recently.

Government representatives are involved in dialogue with the self-exiled Baloch leaders are personally in touch with them, the rebel leaders might even return to Pakistan. Brahamdagh Bugti, another rebel leaders said he was willing to stay with Pakistan if the majority of the Baloch people and his political allies wanted the same.

India will be pressurized by other countries to abandon its defiance and restart the dialogue process.

India has always had hegemonistic designs on Pakistan, and much more so under Narendra Modi, his game of proxies is an invasion of Pakistan, s sovereignty.

India has now been exposed at the international level, and it is in a delicate position, what remains to be seen is whether it curbs its terrorist tendencies.

Note:  Al-Rasub is not responsible for write personal opinion, facts and figures.

One Response to “India’s Covert War in Balochistan”