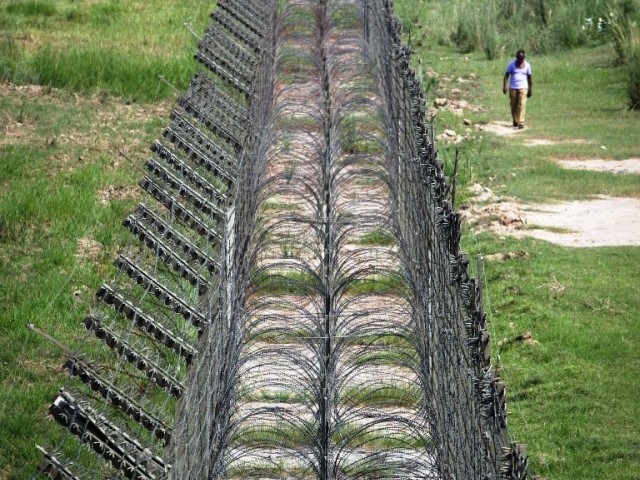 The Line of Control is the military control line between the Indian and Pakistani controlled parts of Jammu and Kashmir. In fact, it was known as the Ceasefire Line until the Simla Agreement in 1972, when it was redesignated as the Line of Control.

India finds it hard to be friends with Pakistan and it gets jingoistic whenever elections approach or when it wants to hide government failure at home. It starts violations at the LoC as a diversion, this aggression has continued since years.

Recently, India has become even more belligerent and confusing ever since Narendra Modi became Prime Minister, his lack of vision and acumen has put the country in retrogressive mode.

In the past two months, more than a 100 ceasefire violations have taken place, resulting in many casualties on the Pakistan side.India plays a dodgy blame game, it keeps accusing Pakistan of firing on the LoC without any evidence to prove its allegations, at the same time it continues its blatant aggression.

The Pakistan army chief General Raheel Sharif has correctly surmised that India is on the warpath as its psy-ops and urban warfare has become impossible to carry on.
He said that India had blatantly violated the ceasefire along the LoC and the international border and “crossed all limits to terrorise Pakistan’s civilian population disregarding international conventions and norms.

Military spokesman Major General Asim Saleem Bajwa tweeted,  “We can sense definite linkage between terrorism being sponsored by India in various parts of Pakistan and belligerence along the Line of Control.

The latest Indian violation caused nine casualties, including a woman and a child.

Recently, the Indian government has recieved many setbacks in its proxy war in Balochistan, more than 1000 rebels have surrendered and given up arms to the government.

Not only that, an important commander was also killed, shortly afterwards the rebel leader Brahamdagh Bugti declared that he was returning to Pakistan and giving up his demand for a separate Balochistan if thats what his companions wanted. India had its hopes pinned on sabotaging the China Pakistan Economic corridor with these proxies, now its entire paraphernalia has collapsed like a house of cards.

Secondly, another ‘faultline’ of ethnicity was being exploited in Pakistan, s biggest city Karachi, the political parties in power were stoking up ethnicity, running extortion and kidnapping mafias which financed terrorism. The law enforcement agencies launched an operation after which crime has gone down by 70% and the city is buzzing with economic activity again.

Thirdly, India had been supporting, training and financing some mercenaries, calling them Pakistani Taliban who wreaked the utmost havoc in the country. The Pakistan army just concluded a successful operation in FATA and Waziristan, which has destroyed their entire infrastructure and terminated many of them, some ran away and found sanctuary in Afghanistan.

Fourthly, India was using Afghanistan as a base to organise, train and facilitate mercenaries for terrorism in Pakistan. India had an embassy in Kabul and consulates in Mazar-e-Sharif, Jalalabad, Kandahar and Herat, it also had scores of Indian facilitation centres along the porous Pakistan-Afghanistan border.

US Defence Secretary Chuck Hagel once said that India is financing terrorism in Pakistan from Afghanistan, the US even asked India to wind up its consulates in 2009. President Ashraf Ghani has made efforts for better relations with Pakistan and engaged the Afghan Taliban in a peace process so India is on the backfoot.

Today, the entire scenario has changed as Pakistan has dealt with threats effectively.
India,s heavily financed strategies and designs for the dissolution of Pakistan have met failure, there is a new desperation in its moves and calculations. It might even attempt starting limited war with Pakistan in its mindless fury, now is the time that Modi-led India might do something foolhardy.

The Indian NSA Ajit Doval is on record threatening to separate Balochistan, then the Defence Minister Parrikar has been saying that it is alright to do terrorism to fight Pakistan.
PM Modi threatens Pakistan in almost all his public speeches, with this trio pulling the strings, India might find itself catapulted into further chaos even though it is the poorest nation in the world with a multitude of human issues.

The eventual China- Pakistan scenario is making the Indian govt desperate and they often resort to false flag set-ups and skirmishes on the LOC. Recently, NSA level talks were cancelled as India dragged its feet over Pakistan meeting Hurriyat leaders or discussing the Kashmir issue.

Pakistan refused to have such talks, it was an excuse on India, s part to avoid accepting evidence of Indian proxy terrorism.  Their aim was to present Pakistan as a ‘centre of terrorist activity ‘ to world media, but now Pakistan has three dossiers of evidence of Indian terrorism and involvement here, which it intends to present at the United Nations.

India keeps complaining about infiltrators from Pakistan, the last person it has paraded as one turned out to be a demented bus conductor from Indian Occupied Kashmir, and this was exposed by the ubiquitous Hamid Mir of Ajmal Kasab fame.

These are excuses to blame Pakistan, it is quite unbelievable that any ‘infiltrations ‘ could happen in an area where the Indian army is heavily deployed. They are equipped with all sorts of surveillance equipment and there is even talk of drones to be used there in future.
They have built a 550 km barrier along the 740 km Line of Control, there is electrified double fencing connected to sensors and thermal imaging devices, lighting systems and alarms.  Such a barrier breaks all regional accords and United Nations resolutions on the matter.

Recently, former US ambassador to Pakistan Cameron Munter was in Karachi for a seminar, he commented that Pakistan’s concerns over India’s ceasefire violations are legitimate.

Now is the time that the U.S. should use its influence over India, and stop things from going haywire in this region. The US National Security Adviser Susan Rice has arrived in Pakistan on her way from China to attempt to defuse tensions between both countries.
The US is concerned over recent developments and the ongoing ceasefire violations.
Pakistan,s outrage over these violations is correct, and so is its stand on Kashmir, which is not a bilateral issue between India and Pakistan.

It is internationally recognised disputed territory waiting for a referendum sunce 1948, the Kashmir issue has to be resolved to achieve peace in the region. Also, India tends to overlook the fact that the more it dabbles in creating unrest in Pakistan, there are more chances of a ‘spillover effect’ in India. It already has at least a dozen major freedom movements going on, with 1/5th of Indian territory already out of its control and under parallel Naxal government. India also needs to realise that an economically strong Pakistan is to its benefit, and not a threat.

China has been hopeful that India and Pakistan’s admission to the Shanghai Cooperation Organisation would play a constructive role in pushing for the improvement of their bilateral relations.

These recent developments do seem as if India,s ‘Cold Start’ doctrine is being implemented. It would be extremely unwise on its part to push Pakistan to use its nuclear deterrence, it is Pakistan which will determine the intensity and the scale of war, there is no option for ‘limited war’, it cannot be contained to just Pakistan. Also, todays Pakistan army is combat-ready, battle hardened, in practical warfare since 13 years.
Even a spark can set off a fire in this nuclear environment.

Pakistan should highlight India,s international law violations on all international forums, India has never co-operated with UN observers while Pakistan gives them complete access. This denotes that India has a lot to hide, it is high time that it becomes a responsible nation.

Note:  Al-Rasub is not resonsible for writer personal opinion.