India and the Mukti Bahini 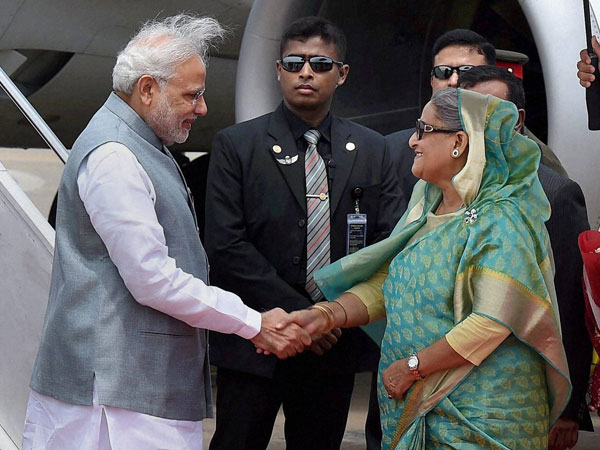 Indian Prime Minister Narendra Modi recently visited Bangladesh where he received a ‘liberation’ war award on behalf of former Indian premier Vajpayee. He recounted the Indian conspiracy to divide Pakistan, saying that the establishment of Bangladesh was the desire of every Indian. He himself had participated as a Jana Sangha volunteer to help create a support base for the rebel force Mukti Bahini created by RAW.

This confession coming from the Indian PM has vindicated Pakistan,s stand on the 1971 debacle and negates the claims of many local intellectuals that it was a home-grown freedom movement.

Some of these intellectuals of yester-years have clearly been exposed as traitors today with Modi,s proud confession that India financed, trained and ran the Mukti Bahini outfit which played a role in the creation of Bangladesh.

It is high time that media and people in general speak out clearly against what has always been and is the Indian role, people like Hamid Mir and Asma Jehangir have recieved awards on behalf of their parents Waris Mir and Malik Ghulam Jilani in Bangladesh.
Everything has changed with Modi,s open confession, those who were part of the game are now obviously perpetrators of a sedition plan, even poet Faiz Ahmed Faiz helped romanticise the treason and sedition.

A retired R&W operative R.K Yadav in his book Mission R&W published last year gave explicit details on classified matters. The founder of R&W, R.N Kao was the brain behind the so-called war of liberation in 1971 and the scheme was approved by Indira Gandhi.

Kao created the Mukti Bahini guerrilla force from 1 lakh Bangladeshi refugees in India and he engineered the series of events which led to the formation of a new country, advantage was taken from the political crisis brewing between East and West Pakistan. K.S Nair , RAW chief in 1977, has admitted that all those involved in the Agartala conspiracy were Indian agents.

Nair was working under the cover of Col.Menon and had succeeded in buying some Bangladeshi Navy employees as well as activists of the Awami League. These agents tried to raid the Pakistan Army armory in haste even though Nair had promised them arms,subsequently they were arrested and this sedition case was named the Agartala conspiracy.

Details are provided in the book of how R&W got a Fokker Friendship Indian Airlines plane hijacked by their own agent to Lahore in 1971 so that it could be blamed on the Pakistan government. This also gave India the chance to ban Pakistani flights from using its airspace, hampering military transport to East Pakistan, Yadav boasts of it as a ‘masterstroke’.

Commandos of Special Frontier Force , paramilitary branch of RAW , trained the Mukti Bahini , a technical network was prepared and East Pakistan was encircled at all strategically important vantage points. Initially hit and run raids , ambushes and attacks were done by Mukti Bahini, occupying territory along with the backing of Indian army, more than 25,000 soldiers of Pakistan Army were killed in this initial phase.

In the second phase ,Mukti Bahini received Indian army and guided them to the interior so that formations could move in. Youth wings of Awami League were organised into a new mercenary force , the Mujeeb Bahini, again trained by RAW,s SFF commando.
These Mujeeb Bahini were used for the frontal assault against Pakistan army.

The book also mentions the presence of RAW operatives in Peshawar who alerted Indian army about any Pakistan army troops movement towards the western sector.
Pakistan was never fighting Bangladeshis but in reality the Indian army , which had the advantage of being joined by land with East Pakistan.

Pakistan Army was made a target of false accusations and lies helped by RAW paid journalists and writers.

Here are some excerpts from Yadav,s book :

“Kao was asked by Indira Gandhi to prepare ground work for the army before the final assault and use R&AW to its optimum in this operation Kao with his formidable colleagues build up a guerrilla force ( Mukti Bahini) of more than one lakh Bangladeshi refugees which created havoc for Pakistani army in East Pakistan.”

After getting the plan of formation of Bangladesh complete , Yadav mentions that Mujib was assassinated by RAW as India wanted a weak government, easy to dictate terms to.

Dr.Sarmila Bose in her book ‘Dead Reckoning’ had already illustrated what today Modi has announced was an Indian operation after it could not win the 1965 war.

She says that one of the bloodiest wars in the past half-century has been “dominated by the narrative of the victorious side” – Bangladeshi nationalists who won independence in 1971 from Pakistan.

Both sides in the conflict “are still imprisoned by wartime partisan myths”.
Bose is a senior research fellow at Oxford University and has been a former BBC presenter.
She said the Pakistani army was “demonized” by the pro-liberation side and accused of “monstrous actions regardless of the evidence”, while Bengali people were depicted as “victims”.

“This has led to a tendency to deny, minimize or justify violence and brutalities perpetrated by pro-liberation Bengalis,” she wrote.

She writes the Bengali nationalist movement “turned into xenophobic violence against non-Bengalis” specially West Pakistanis and mainly Urdu-speaking people who migrated to East Pakistan from India and are also known as Biharis.

“In the ethnic violence unleashed in the name of Bengali nationalism, non-Bengali men, women and children were slaughtered,” Dr Bose wrote that vile atrocities took place in the towns of Chittagong, Khulna, Santahar and Jessore during and after the 10-month war.

“Non-Bengali victims of ethnic killings by Bengalis numbered hundreds or even thousands per incident… men, women and children were massacred on the basis of ethnicity and the killings were executed with shocking bestiality.” Some of the worst brutalities were among Bengalis themselves, between those patriots defending the unity of Pakistan and those seditionists who were fighting for the liberation of Bangladesh.

While “the killing of pro-liberation professionals by pro-regime death squads in the dying days of the war stands out as one of the worst crimes of the conflict… brutalization and elimination of those with a different political viewpoint seemed to be the hallmark of nationalist Bengalis too”. She wrote there was evidence of the violence suffered by “non-Bengali victims of Bengali ethnic hatred”.

“Of the corpses reported littering the land and clogging up the rivers, many would have been Bihari… as Bengali mobs appear to have killed non-Bengalis indiscriminately while the Pakistani army appeared to target adult Bengali men.” She mentions one incident at Khulna on 28 March 1971 in which Bengalis “slaughtered” large numbers of Biharis in the town’s jute mills.

Dr Bose also rejected the suggestion that three million Bengalis were killed by the Pakistani army. She calls it a “gigantic rumour”, and it was “not based on any accounting or survey on the ground”.

“None of the popular assertions of three million Bengalis allegedly killed by the [Pakistani] army cites any official report,” she says. “Claims of the dead in various incidents wildly exceeding anything that can be reasonably supported by evidence on the ground – ‘killing fields’ and ‘mass graves’ were claimed to be everywhere, but none was forensically exhumed and examined in a transparent manner.”

Her conclusion over how many died has been roundly rejected by Mr Mohaiemen, who pointed out that Bangladeshis have themselves publicly dissected the problem of “numbers”, going back to 1972 when the three million number was first cited.

She writes “Ultimately neither the numbers nor the labels matter. What matters is the nature of the conflict, which was fundamentally a complex and violent struggle for power among several different parties with a terrible human toll.”

When Dr.Sarmila Bose,s book came out it was wildly rejected by our local coterie of pseudo-intellectuals and it was regarded as controversial. Now no room for doubt remains that India created, fought, trained and deployed the people involved to make the new country as the Indian PM himself has proudly proclaimed the Indian role in the masquerade.

Throughout the past decades, dis-information has been spread by a selected group of journalists that monopolise Pakistan print media and now the TV channels as well.
The East Pakistan secession was planned and Bangladesh became a secular country where today Islamists are hounded at the Indian behest. The country is not even a nuclear power and its government works in tango with the Indian government like an associate state.

In Bangladesh,s 2004 elections, 132 crore were given to the lady PM from RAW,s secret fund, though some of the anount was misappropriated by RAW functionaries according to Yadav,s book.

This is how India runs Bangladesh like a satellite state.  In todays India, Bangladeshi refugees are looked down upon in cities like Calcutta etc which is a bitter irony.

Yadav in his book also claimed that RAW has deteriorated to a level which needs drastic reforms otherwise it can only think of its past glories. That is good news for this region as the Research & Analysis Wing is responsible for many crimes against humanity.