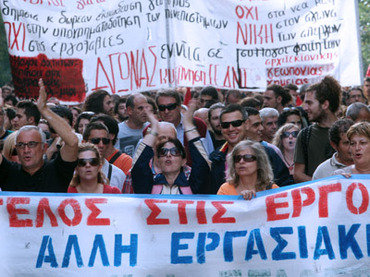 The IMF has apologized for a mistaken email demanding Greece dismisses thousands more civil servants than the earlier agreed lay off of 27,000 employees. The letter spurred concerns in the government that more layoffs will be demanded.

­The email arrived at the Greek Ministry of Finance from the IMF Representative in Athens Bob Traa before the Eurogroup discussions on the next tranche of 31.5 billion euro bailout on Tuesday. Confused Government officials rejected the IMF’s new requirement, a source in the Greek government told AFP. The IMF apologised and explained the letter was sent by mistake, reports the Ta Nea newspaper. The paper’s sources in the cabinet do not rule out the issue of new layoffs could be raised again by the creditors if the country doesn’t fulfill the agreement to dismiss two thousand employees by the end of the year.

Unemployment in Greece has already climbed to over 25 per cent according to official figures. Greece has pledged to implement a series of unpopular austerity measures to receive two aid payments, worth 5.0 and 8.3 billion euros, by the end of the year. This includes firing 125,000 government employees by 2016, among them 27,000 workers in 2014.

Over the last few days Greece laid off hundreds of people which led to demonstrations across the country. The union of local council workers POE-OTA has begun a nationwide mobilization to stop the layoffs. Union members have occupied scores of town halls around the country to prevent officials from beginning the process.

Some mayors oppose the layoffs on the grounds of insufficient staffing, including those of Athens and Thessaloniki.

Eurozone finance ministers are meeting later on Tuesday to discuss resuming loan payments to Greece after a five-month hiatus brought by reform delays and a protracted electoral campaign. The country has been waiting for a bailout instalment worth 31.2 billion euros since June, which is part of the 130 billion euro financial assistance package that was granted earlier this year.