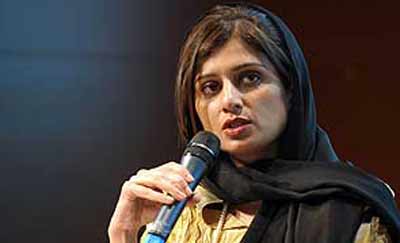 Pakistan Foreign Minister Hina Rabbani Khar’s husband Feroz Gulzar has rubbished rumours about differences in their relationship, saying they are a campaign to malign his wife.

Gulzar, an industrialist from Punjab province, was quoted by Geo News channel on Thursday as saying that the campaign to malign his wife was “rubbish” that does not merit comment.

He further said there was “no premise for such trash” and that he would not offer any comment on “social media gossip”.

There has been considerable speculation about the fate of Khar’s marriage to Gulzar since a little-known Bangladeshi tabloid claimed without any proof that she was allegedly involved in a relationship with Bilawal Bhutto, son of President Asif Ali Zardari.

Gulzar said he had been informed about reports of his purported differences with his wife by his cousins, who had described the reports available on the internet as “not worth reading”.

Gulzar was quoted as saying that he was not aware of the details of these reports.

Asked about rumours of his separation from his wife, Gulzar said no such issue was being considered by him. He further said it was unfortunate that the people behind such gossip had dragged his two young daughters into the affair.

Gulzar said it was regrettable that there is no system in Pakistan to identify those responsible for “such rumour-mongering”.

He brushed aside a suggestion that US authorities should be asked to look into the matter, saying: “It wouldn’t be appropriate to ask them for a probe”.

Khar, who is currently in the US as part of President Asif Ali Zardari’s delegation to attend the UN General Assembly session, was quoted by Geo News as saying that she too would not comment on such a “reprehensible matter”.