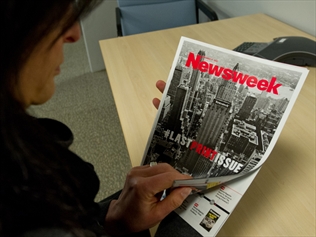 ALMOST 80 years after first going to print, the final Newsweek magazine has hit newsstands featuring an ironic hashtag as a symbol of its Twitter-era transition to an all-digital format.

The second-largest news weekly magazine in the United States has been grappling with a steep drop in print advertising revenue, steadily declining circulation and the migration of readers to free news online.

Its first issue, on February 17, 1933, featured seven photos from that week’s news printed on the front, including Adolf Hitler snapped in Berlin as he declared “the German nation must be built up from the ground anew”.

For its final cover, dated December 31, editor Tina Brown used an aerial archive shot of the magazine’s New York headquarters as the backdrop for her message #LASTPRINTISSUE – the word print emblazoned in red ink.

The Washington Post sold Newsweek to California billionaire Sidney Harman for one dollar in 2010, ahead of a deal with internet conglomerate IAC to merge the magazine with the news and opinion website The Daily Beast.

Memorable Newsweek covers in recent years have included a December 2003 edition with a bedraggled, long-bearded Saddam Hussein pictured below the headline: “We got him.”

In 2011, a computer-generated image of the late Princess Diana alongside Kate Middleton, the photogenic young lady who was about to marry her son Prince William, caused quite a stir.

In May, after Barack Obama came out in favour of same-sex marriage, he was adorned with a rainbow halo and the accompanying headline: “The First Gay President.”

The #MuslimRage cover in September, which sought to spark a conversation about anti-American violence sweeping the Muslim world, saw thousands take to Twitter to mock the premise with both real and imagined gripes.

Announcing the demise of Newsweek’s print magazine in October, Brown, also editor-in-chief of The Daily Beast, said the all-digital version would be targeted at today’s “highly mobile, opinion-leading audience”.

She cited research showing that 39 per cent of Americans get their news online and said Newsweek had reached “a tipping point at which we can most efficiently and effectively reach our readers in all-digital format”.