Greek-German Tensions Over Finances Spill Into Another Arena 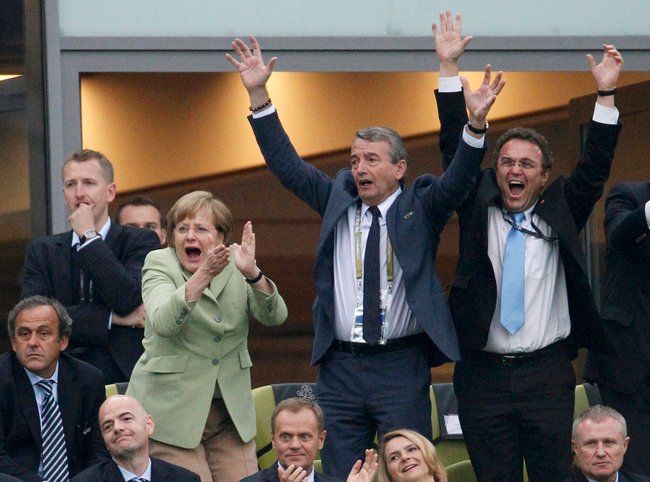 GDANSK, Poland — The giant blue-and-white flag blotted out the overcast Baltic sky on Friday as the Greek fans pounded their drums and cheered at the foot of the centuries-old City Hall here. The Germans took up a chant in honor of their chancellor, Angela Merkel.

“Without Angie, you wouldn’t be here,” bellowed the German fans, referring to the multibillion-dollar bailouts Greece has received from European partners, first and foremostGermany.

The leaders of Germany and Greece may be scrambling to hold Europe together, but on the popular level the strain of a three-year-old financial crisis is beginning to tear it apart. And while the European soccer championships have often served as a safe outlet for channeling nationalist passions into Europe’s favorite pastime, for thousands of Greeks and Germans — brought together by chance in the quarterfinals here — this encounter turned into something more than a game.

“They’ve provoked us with all of this terrible talk about Greece,” said Dimitrios Gorovelis, 33, part of a group from Aachen, in the far west of Germany, that had rented two silver vans and driven overnight to Poland. Some were originally from Greece and others were born in Germany, but they all were there to support the motherland.

For Greeks, Germany now represents austerity and foreign diktats. For Germans, the Greeks represent tax-dodging wastrels looking for handouts. “Goodbye Greeks,” declared the front page of the daily newspaper Bild on Friday; the paper has previously published calls for Greek islands and even the Acropolis to be sold. “Today we can’t rescue you,” the paper said.

“A lot of people, including myself, would have never thought even just a few short years ago that the relationship could deteriorate the way that it has,” said Janis A. Emmanouilidis, a senior analyst at the European Policy Center who is half-Greek and half-German. He cited the ties of migration and tourism and the regard Germany held for Greece as the cradle of democracy and Greece for Germany as a model of efficiency. “You have these reflexes, like defending oneself,” Mr. Emmanouilidis said.

Everyone from soccer experts to political analysts to fans cautioned that, in the end, the only thing on the line was the right to move on to the semifinals against the winner of the game between England and Italy. And for the most part, the mood before the game on Gdansk’s historic Dluga Street was peaceful and joyous.

Still, one middle-age Greek implored Germans in their own language, his voice quavering with anger, to stop teasing about pensions and poverty “before things escalate into violence.” A man in a German jersey rushed from the crowd and gave him a hug.

Outside the stadium after the game, which Greece lost handily to heavily favored Germany, a group of Greek men dressed as Olympians of myth clapped and sang, while one danced in the aisle. “We Greeks don’t have money, but we have a big heart,” said Christos Mistridis, 33. The dancer shushed him and said, as if sharing a secret, “Angela Merkel thinks we’re at work.”

The penalty kick that gave Greece its consolation goal near the end of the game was “a little present on top of the money we gave them,” said Hendrik Grote, who wore a German soccer jersey and lederhosen. “That’s enough now though.”

The tournament is held every four years, but this time around has been scrutinized from the very beginning through the kaleidoscope of the Continent’s crisis, with Twitter users, headline writers and barroom wits comparing the records of bailout countries to triple-A-rated ones with more than a hint of schadenfreude.

Portugal, which was forced to seek financial assistance, was the first country to qualify for the semifinals. The Netherlands, a soccer powerhouse with a sterling credit rating, lost all of its matches. But nothing quite compared to this match, between the major antagonists of the crisis, who have been trading barbs for more than two years.

Gdansk, with its intertwined Polish-German history and recent Communist past, is a fitting location to realize how far Europe has moved from the old cleavages of the cold war and East-West thinking. The new reality is a paradigm of a hard-money north led by Germany that is starkly at odds with a soft-money south, which would not be such a problem if they did not also share a currency and a central bank.