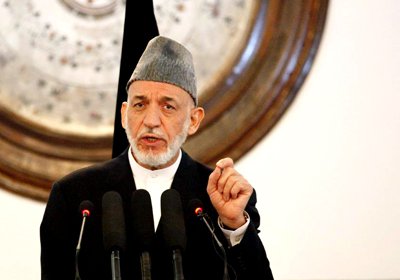 During his farewell event with the cabinet at the Presidential Palace on Tuesday, President Hamid Karzai highlighted some of his major achievements and struggles throughout his 13-year presidency.

“Our government and our structures today are a hundred times better than when I first took office,” Karzai said. “I had to micromanage everything when I first came. But now, the new president-elect could take over within hours of the Independent Election Commission’s (IEC) announcement.”

Karzai stressed, multiple times, that Afghanistan’s national unity stands as firm as ever, declaring to the world that propaganda has not been and will not be successful in creating division in the country.

“Our people didn’t vote based on regions or ethnicity. The two electoral teams, too, were ethnically diverse. This is proof of our unity.”

“If Pakistan and the U.S. want, there will be longstanding peace and stability in Afghanistan,” he said. “We want friendly relationships with both countries. But Pakistan wants to control our foreign policy, and that won’t happen. As for the U.S., their words and actions don’t match,” Karzai added.

Moreover, the president stated that Afghans are the victims of a foreign war on their own soil.

“Attacks escalated all around the country as soon as the elections started. Our security officials are present here and they can confirm that all those responsible for the attacks were foreigners,” he said. “We are losing our lives in a war of foreigners.”

He thanked all countries that have offered their genuine support to the government of Afghanistan, namely India, Japan and Germany.

“We have developed strong ties with the international community,” he added.

Toward the end, Karzai said that he will be in Kabul and continue to cooperate with and stand by the new government.

The inauguration ceremony of the new President-elect Ashraf Ghani Ahmadzai will take place on Monday. For the first time in Afghanistan’s history, power will be peacefully transferred from one elected president to another.