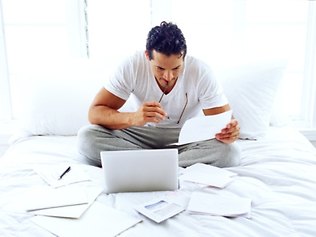 THE days of nine to five are over with more workers now putting in 12-hour days – and it’s all thanks to technology.

As more of us check email from home or our smartphones the typical working day now starts at 7.17am and finishes at 7.02pm.

These are the findings of a study that reveals workers are mentally “clocking on” before leaving the house and struggling to switch off when they get home again.

The silver lining is that most bosses don’t mind when staff arrive late to the office because they are confident that they’ve already started working via mobile technology.

And employees are happier with the more flexible arrangements.

With the lines between work and life increasingly blurring, more workers are finding it acceptable to brush their teeth and shower at the office, as well as doing their grocery shopping online during the work day.

The survey from technology company Mozy found workers in the UK logged on before the French, Germans, the Irish and Americans.

Director of consultancy Managing Work/life Balance Barbara Holmes said the story was the same in Australia but was no bad thing.

“Yes people may well be logging on at 7am to do their emails but people are working differently and may also be doing some personal things while they are in a work space. This could be just what people are looking for.”

The index, which is based on a survey of more than 16,000 business professionals in more than 80 countries, found Australians also had a better work-life balance five points higher than the global average of 124.

But we are also working harder than two years ago. More than half of workers surveyed admitted they have taken on additional duties since the global economic crisis.