Ghani to Introduce Nominees to Parliament on Tuesday 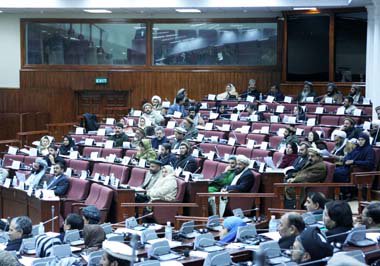 After meeting with lawmakers in Parliament and failing to introduce the nominees for the National Directorate of Security (NDS) and Central Bank on Saturday as was originally planned, President Ashraf Ghani is now expected to introduce the full list of cabinet nominees to the Lower House on Tuesday.

President Ghani and Chief Executive Abdullah Abdullah met with the administrative boards and chairmen of 18 House commissions Saturday afternoon. The national unity government leaders cited their busy work schedule as the reason that they won’t introduce the 27 nominees to Parliament until Tuesday, though the most recent delay is just a small extension of the much longer delay the cabinet formation has faced since the new government took power in September of last year.

“In the meeting that we had with the president, leaders of the national unity government told us that due to their busy work schedule, President Ghani will be introducing nominees to the House of Representatives on Tuesday,” House Secretary Said Ikram said. “At the beginning, nominees will be presenting their programs in general and then everyone will vote on the nominees in one day.”

Meanwhile, in the lead up to the vote, MPs have begun discussing the nominees and the rumors around the national unity government’s plans for trying to get them approved.

“There are rumors that the president wants to get votes for all the nominees as a group, which is against the Constitution and seems difficult as well,” Sar-e-Pul MP Aziza Jalees said.

The Administrative Committee of the House of Representatives has said that the legislative commissions have begun reviewing what documents have arrived. Chairmen of the committees will be meeting on Sunday to specify dates for the nominees to come and present their programs and another day for MPs to cast their votes.