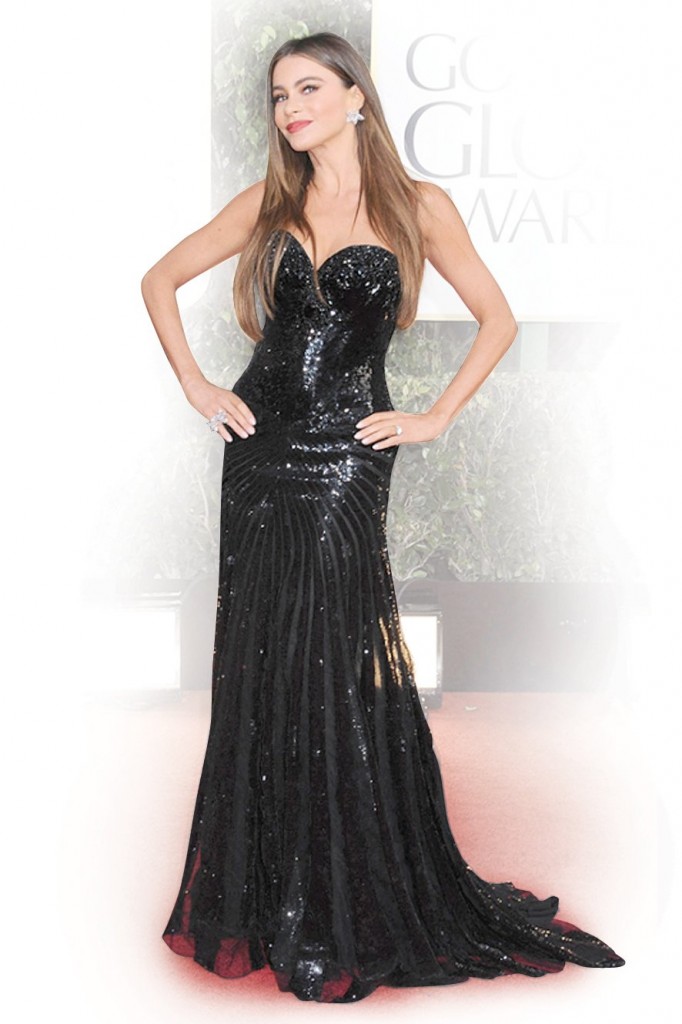 Vergara, with her beauty queen stance and Colombian energy, placed third in the Best Dressed List by People Magazine, and consistently in the Top Five Choices in many countries’ broadsheets and blog sites, including Yahoo!, E! News, NY Times, the Examiner and the Hollywood Reporter.

“It’s by Michael Cinco, he’s a new designer for me, I usually stay away from black but when I saw it and put it on, it was amazing,” proclaimed Vergara to Ryan Seacrest, as her towering sexual presence sent a shout-out to the world that Filipino fashion design had finally arrived in Hollywood. An hour after she red-carpeted on cable, 500 tweets a minute confirmed its knockout success.

Personally, I liked it, because it looked comfortable yet Old Hollywood glamorous. It was a perfect fit, like Vergara was poured into the gown. She looked happy, too.

“It was Facebook that got me hooked up with my partner in Los Angeles, Antonio Esteban, who runs Style PR, with a showroom in Beverly Hills that works closely with top stylists, especially during awards season,” said Michael in a phone patch PDI exclusive interview.

“Esteban saw some of my designs, so he sent me a PM on Facebook, and that’s what got the ball rolling. Next thing, we were talking, and from my 2013 couture collection, I sent cocktail dresses and long gowns.

“Now, Style LA exclusively handles me in celebrity placements and represents my work exclusively in the US.

“An early morning call woke me up last Monday, and Esteban broke the great news. It’s only now, with all the attention that dress is generating, that I realize it’s a special moment in my career. I thank God for this opportunity and I promise to bring other Filipino designers to our Beverly Hills showroom,” said the soft-spoken and humble Cinco.

Next week you can watch Cinco on Star World, where he is the guest judge and featured designer in “Asia’s Next Top Model,” with André Leon Talley and Nigel Barker.   Cinco was highly recommended by Tyra Banks. This is a franchise, and Banks is not the producer.

“Before that, I did ‘America’s Next Top Model’ for two seasons with Nigel Barker, Jay Manuel, Jay Alexander and André Leon Talley. For Cycle 16, ANTM asked me to do a collection for a landfill shoot in LA. Then for the next season, Cycle 17 All-Star, ANTM flew me to Greece to do all the dresses for Motion Editorial shoots and the final runway show,” said Cinco about his entry into the televised fashion reality show.

Cinco, who is always in wraparound sunglasses, took them off for the TV show, revealing a sweet-faced Filipino who has been fast-tracked to fashion superstardom. Check out the photos of his incredible designs that border on the surreal, inspired by mid-century Parisian couture.

Cinco has also made a special gown for Lady Gaga that she wore last week, along with outfits for Britney Spears for her new music video and costumes for Chris Brown, through top celebrity stylist Paris Libby.

Where does Michael Cinco go from here? Rumors are circulating that he is doing costumes for a hush-hush Hollywood movie right now. Also, the producer of E! News has called him that the stylist of Cate Blanchett is interested to see his gowns for the Oscars on Feb. 24.

For this Filipino talent, the yellow brick road to the Oscars is paved with good intentions and beautiful show-stopping gowns that get the green light.