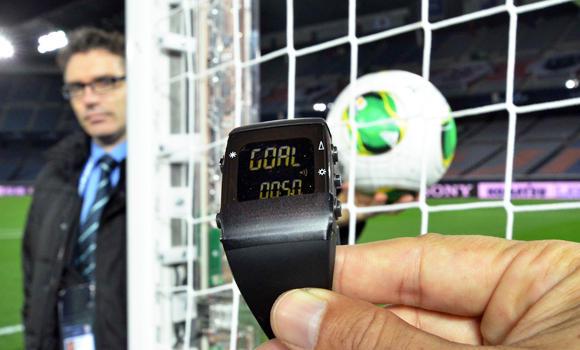 YOKOHAMA, Japan: Prompted into action by England midfielder’s Frank Lampard’s disallowed goal against Germany at the 2010 World Cup, FIFA will use goal-line technology for the first time in Japan this week.
The technology will be employed in Thursday’s Club World Cup curtain raiser between Sanfrecce Hiroshima and Auckland City as soccer’s governing body finally answers calls for it to join the 21st century.
Hawk-eye, widely used in cricket and tennis, and GoalRef, which uses a microchip in the ball and low magnetic waves around the goal, will be used at venues in Toyota and Yokohama.
“The important thing is for the technologies to perform as well as possible and there are no mistakes,” Hawk-Eye’s managing director Steve Carter told Reuters.
“Obviously the worst scenario you can have is if the technology isn’t that accurate is the TV broadcast cameras proving that the answer’s wrong.”
With European champions Chelsea, whose players have been at the center of several goal-line controversies in recent years, competing in Japan, the science is set for even closer scrutiny.
“Hawk-Eye has seven cameras per goalmouth,” said Carter. “You’re talking millimeter level and that’s absolutely essential for football.”
Carter referred to John Terry’s goal-line clearance in England’s 1-0 win over Ukraine at Euro 2012 as an example of the precision required to get decisions right.
“If you look at the John Terry incident, we measured it using the TV footage, the ball was actually 25 millimeters over the line,” he said.
“That is well within the accuracy of our system — two, three, four millimeters of accuracy in that scenario. Football needs that level.”
FIFA had resisted pressure for technology, successfully used in other sports including cricket, tennis, rugby and American Football, for years.
But Lampard’s goal for England against Germany in South Africa, not seen by either the referee or linesman, prompted FIFA to finally turn to science.
“What happened at the World Cup in 2010 cannot happen again,” FIFA general secretary Jerome Valcke told reporters.
“The World Cup is the biggest sporting event in the world. The ball was not two centimeters in the goal — it was clearly in.
“Millions of people see that and wonder how the referee didn’t see it. That’s the decision we made after the 2010 World Cup.”
EXPENSIVE BUSINESS
Hawk-Eye and GoalRef are front-runners for next year’s Confederations Cup in Brazil, although FIFA have kept the door open for other competing companies.
“It is expensive but over time technology gets cheaper,” said Valcke, adding that FIFA had invested $2 million to date on development and installation at stadiums in Japan.
“The more market competition there is the cheaper it will get. It has to be available for all but at the same time it has to be accurate. We can’t afford mistakes.”
After analyzing data taken from the Club World Cup, FIFA will choose which system to implement for the six Confederations Cup venues by the end of March.
Those chosen will remain in place for the 2014 World Cup, although the six other venues could potentially end up with a different system.
“Obviously the Confederations Cup is going to be a competitive tender process,” said Carter.
Both the Hawk-Eye and GoalRef systems inform referees the ball has crossed the goal-line in a split second via a vibrating wrist-watch flashing the word “GOAL.”
GoalRef were equally confident of persuading FIFA their radio-based system using low-frequency magnetic fields would be the most accurate.
“We wouldn’t be doing this if we weren’t confident we were going to proceed further beyond this tournament,” said programme manager Ingmar Bretz.
Whichever system FIFA chooses, the likes of Chelsea, eliminated from the 2004-05 Champions League by Luis Garcia’s “ghost” goal, will have one less reason to blame the referee.
Hawk-Eye also floated the idea of an ultra-motion video replay, although stopping the game to watch a replay would be detested by FIFA president Sepp Blatter.
“It looks perfectly down the goal-line,” said Carter. “If football wanted to use it, a definitive replay that absolutely proves the ball is over the line.
“It would be a bit like watching Usain Bolt run the 100 meters, winning by one hundredth of a second and then not seeing a photo-finish replay.”