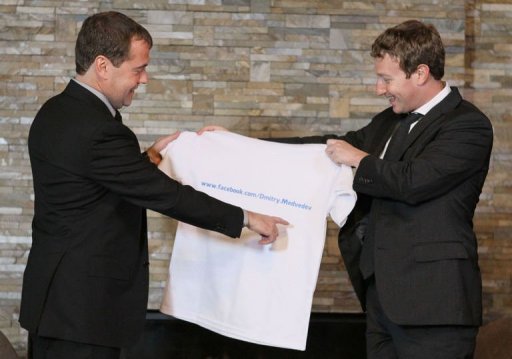 The man behind the world wide face book phenomena Mark Zuckerberg has met Russia’s tech savvy Prime Minister Dmitry Medvedev. The two have been talking high-tech and how to inspire Russian IT wizz kids.

“Medvedev and Zuckerberg have discussed Facebook’s possible presence in Russia not only as asocial network, but also as a company that deals with the most advanced products. They have also discussed Skolkovo as a place where startups could be of mutual interest,” said Natalya Timakova, the Prime Minister’s Press Secretary.

Among the deals agreed on is the start of a center for research and development in Russia by Facebook, as Nikolay Nikiforov, Russia’s Communications Minister, writes in his blog right from the meeting.

On Monday Moscow became the final destination for Facebook Developer World Hack 2012, a series of events across 12 countries aimed at bringing to light the most talented IT specialists. The winners will go to San Francisco and meet the Facebook team. Among the countries also involved into competition are the US, Mexico, Argentina, Germany, Taiwan, Indonesia and Poland.

The Facebook founder wants to hire Russian IT specialists, Anatoly Karachinsky, President of Russian IT company IBS Group, told Vedomosti daily. “Those who were there [at a Facebook job interview], were offered a job and immediate relocation to the US,” Karachinsky writes in his Facebook blog. What’s happening now resembles 1998, when Microsoft was luring away Russian programmers who were frightened by the crisis.

It’s not the attempt to attract Russian specialists to the Facebook team, but the way Russian officials treat it, that outrages Karachinsky.

“If they [the Government] are interested in supporting Russian companies, than it stimulates Western companies to place their orders here, as authorities in India and China do … And if after the meeting Zuckerberg orders development work from Russian companies, I’ll be the first to welcome that,” the expert said.

However, opinions over Zuckerberg are more divided, as Yuri Ammosov, a Professor at the Moscow Institute of Physics and Technology (MIPT) thinks the chance of getting work experience at such a global giant provides a unique chance. “Serfdom has long been abandoned,” he said.

Also, “… even having put roots down abroad, people don’t lose ties with Russia – for example, graduates of MIPT actively help heads of the departments to form academic programmes,” Ammosov concluded.