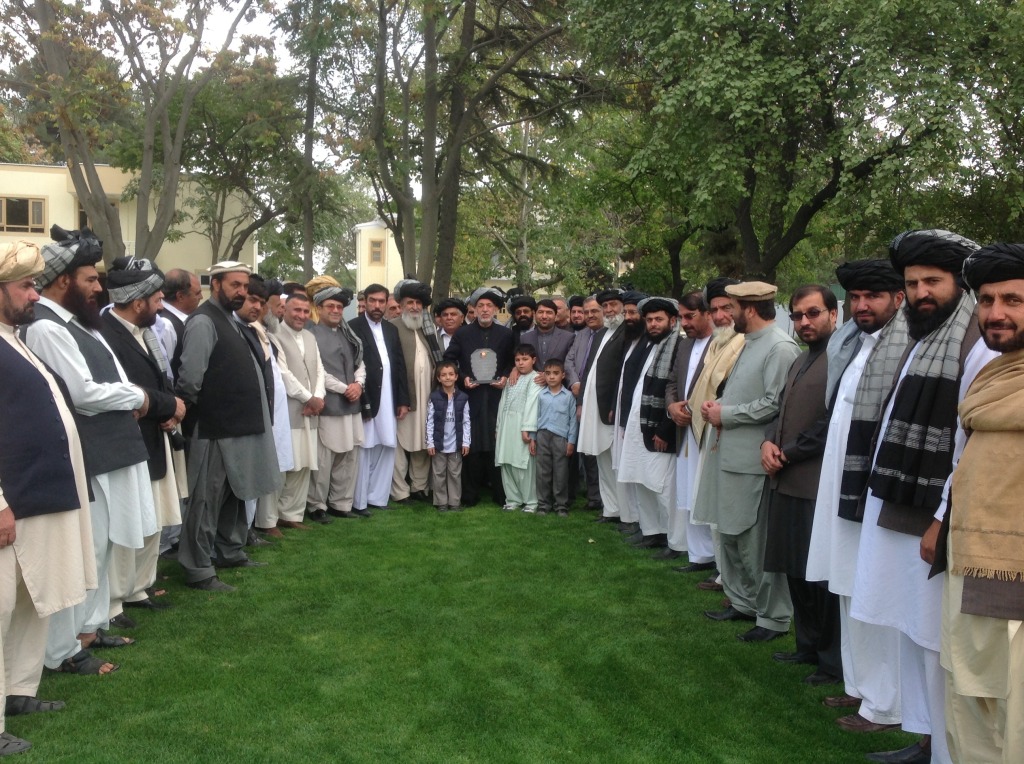 KABUL: Tribal elders from Paktia, Paktika and Khost provinces turbaned ex-president Hamid Karzai and awarded him the national leader in an attempt to respect his services to Afghanistan and make him a paragon of national leadership.
The tribal elders called on the former president at his residence here on Sunday to appreciate his leadership qualities and statesmanship.
Gulab Mangal, the former governor of Helmand province, commended Hamid Karzai’s efforts in strengthening democracy, fostering national unity and revving up peace process.
While talking on behalf of Paktika people, Nadir Khan Katawazi, a lawmaker, said: “When the former President Karzai assumed office as the head of the interim administration the country started its take off from zero, nevertheless because of his indefatigable efforts, today Afghanistan has been changed altogether.”
He added that they were proud of Hamid Karzai for peacefully transferring power to a new leader. “You are still working hard to steer the country towards prosperity and development,” he told Karzai.
Abdul Hakim Mujahid, the deputy head of the High Peace Council (HPC), representing people of Paktia province, said that 13 years ago when the former President Karzai assumed power, Afghanistan was considered to be a failed state, but today the country has political relations with almost all member states of the United Nations. The country has taken a road of change and development. “The armed rebels opposed you and created a mountain of troubles for you. They even didn’t spare your brother as he was ruthlessly killed when you were altruistically and selflessly entrenched in peace bids. Though they killed your brother but you called them your brothers. What did you do has been in accordance with Islam and you showed your opponents that Islam is the religion of brotherhood,” he said to Hamid Karzai. He said that Karzai has been a statesman and not a politician as a statesman always works for the state unlike a politician who always satiates his personal objectives in politics.
Mujahid said that they appreciate Hamid Karzai’s efforts for his peace efforts aimed at ending the war.
Hajji Abdul Rahman Zadran, an elder from Khost province, appreciated the ex-president for his enviable performance.
�“When you were a presidential candidate in 2009 we told you during your election campaigns that our votes are for you. Your past performance made us take this decision in your favor. We didn’t vote you on ethnic basis,” he told Hamid Karzai.
“Karzai being equipped with natural knack of leadership made Afghanistan an abode to all Afghans irrespective of tribal and ethnic roots and affiliation,” he said.
The participants of the meeting said that onward they would call Hamid Karzai a national leader as a mark of honor.
At the end of the meeting, the ex-President Hamid Karzai thanked the elders and said that he was following the suggestions of all ethnic groups, particularly elders from the three southern provinces and enjoyed their cooperation over the past 13 years. He told them the development has been made because of collective efforts and works as one man doesn’t deserve to take its credit. He said that what he has done for the betterment of Afghanistan was something possible with cooperation of people like you.
Hamid Karzia urged the elders to also hold meetings with President Ashraf Ghani Ahmadzai and Chief Executive Officer Abdullah Abdullah. “We should all join hands to steer the country towards development,” Karzai added.
Karzai said that he along with President Ghani and Abdullah are striving hard to restore peace in Afghanistan and move the country towards progress and prosperity. He vowed that this cooperation will continue.