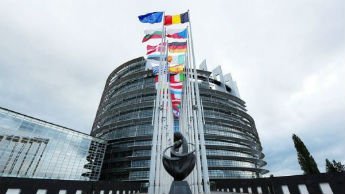 As Europe Union leaders gathered in Oslo to collect this year’s Nobel Peace Prize, EU president Herman Van Rompuy said the bloc would emerge strengthened from its current crisis to symbolise hope again. The award to the EU has provoked widespread criticism from previous recipients of the prestigious award, as well as from some member states of the 27-nation bloc.

While the prize was granted to the EU for fostering peace on a continent that had been ravaged by war until 1945, the award comes as Europe is experiencing an unprecedented economic crisis.

“The EU is going through a difficult period,” Van Rompuy said. “I’m sure we will succeed. We will come out of uncertainty and recession stronger than before.”

“We want Europe to become again a symbol of hope,” he added at a press conference held on the eve of Monday’s official Nobel peace awards ceremony.

Van Rompuy flew into Oslo with European Commission chief Jose Manuel Barroso and European parliament head Martin Schulz, with the three of them due to pick up the 2012 prize on behalf of the EU.

The prize money of around €930,000 “will be allocated to children that are most in need”, according to the European Commission.

Nominating the EU was a controversial move, not least in oil-rich Norway, a non-EU member and home of the Nobel Prize.

Prime Minister Jens Stoltenberg, himself pro-European, hastily pointed out that the prize did not signify any change in his country’s relationship to the EU, as many were quick to confuse the two issues.

In a telling sign, several cabinet ministers from the Centre Party, a vehemently eurosceptic Stoltenberg ally, will not take part in the ceremony, officially due to scheduling reasons. Dozens of organisations called a protest march for Sunday.

According to Norway’s “No to EU” umbrella group, the union is suffering from woes that sit poorly with the Nobel: a defence policy that goes against the notion of demilitarisation, a crisis evoking “riots, extremism”, aggressive trade policies with poor countries and the shutting of its doors to refugees.

Half a dozen EU leaders, including Britain’s premier David Cameron, will snub Monday’s event, held as the union prepares to enlarge by embracing Croatia as its 28th member next year.

EU ‘clearly not a champion of peace’

Three Nobel Peace Prize laureates, including Archbishop Desmond Tutu, have contested the awarding of this year’s prize to the European Union, saying the bloc contradicts the values associated with the prize because it relies on military force to ensure security.

In an open letter to the Nobel Foundation, Tutu of South Africa, Mairead Maguire of Northern Ireland and Adolfo Perez Esquivel from Argentina demanded that the prize money of 8 million kronor ($1.2 million) not be paid out this year.

The EU “clearly is not one of ‘the champions of peace’ Alfred Nobel had in mind” when he created the prize by including it in his will in 1895, they wrote in the letter, a copy of which was acquired by the AP on Friday. “We ask the board of the foundation to clarify that it cannot and will not pay the prize from its funds.”

They said the EU condones “security based on military force and waging wars rather than insisting on the need for an alternative approach”.

The award comes on the heels of yet another tough year for the EU, which is fighting to save the single currency after three years of a crisis that has also sapped political morale.

The chairman of the Nobel Committee, ardently pro-European Thorbjoern Jagland, stressed, however, that the EU had played a vital role over six decades in turning a continent at war into a continent at peace.

There were “a lot of disputes and even dramas” in those years, said Jagland. But “the disputes and dramas have never led to war”, he said. “On the contrary, they led to compromises.”

On hand in Oslo will be the leaders of the EU’s two economic powerhouses, Germany and France.

But relations between German Chancellor Angela Merkel and French President François Hollande are rocky, and are notably holding up a deal to establish an EU-wide banking union that comes down to the wire at a summit this week, just four days after the Nobel ceremony.

The deal on the banks is key to the future of the EU, which stands at a crossroads between a closer union and more federalism — or more uncertainty.

As they pick up the Nobel medal, diploma and almost €1 million prize, there is an increasing weariness with the EU that has led to a rise of eurosceptic and nationalist parties across the bloc.