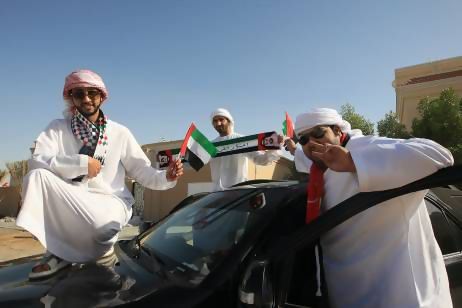 And that outrageous wig is the most important item in Saeed Khoori’s suitcase this morning.

Saeed, 21, a student at the Higher Colleges of Technology in Abu Dhabi, is among the thousands of Emiratis boarding free flights to Bahrain today to support the UAE national football team as they take on Iraq in the final of the Gulf Cup.

Along with his younger brother Omar and cousin Saeed, he will leave Abu Dhabi at noon today on a flight organised by the UAE Football Association.

Saeed says: “We have already made sure to take flags and posters and hats, but most importantly we must take the afro – you can’t cheer properly without the UAE afro.”

Other organised flights include three planes leaving from Sharjah, four from Fujairah and another three from Ras Al Khaimah, all ordered by their respective rulers. Etihad Airways, which operates four daily flights to Bahrain, will put on at least three more.

In Dubai, the telecoms company Du has chartered two flights for its top customers. “Our first flight had 350 seats and was fully booked and we were overwhelmed by the number of customers who still wanted to get seats. So we chartered a second 280 seat flight, and it was booked out in 15 minutes,” said Yasser Al Yousuf, director of premium personal market.

“We sent a team two days ago to make sure that everything has been arranged from transport to snacks. Our customers will not have to do anything but enjoy the trip.”

Others will get to Bahrain for the match at a more leisurely pace. Abdulla Al Harmoudi, along with a cousin and a friend, began his seven-hour road trip yesterday afternoon and will drive through Saudi Arabia to get to Bahrain.

“We usually get together and watch the games in my majlis, but the UAE played so well that we all got excited and decided to go and cheer for them and show our support,” he said. “We didn’t even think of checking for flights; it’s just too much hassle.”

Back home in the UAE, cafes and shisha shops are expecting large crowds and have already set about decorating their stores with UAE flags. “We get a lot of Emirati customers and we’re expecting even more tomorrow,” said Mahmoud Abdelawi Abu Al Hassan, manager of Cafe Di Roma in Abu Dhabi.

“We expect at least 120 people in our Khalidiya branch and 70 people in each of our Muroor and Marina branches. Of course this is more than our usual number and we’ve made sure that our staff is ready to serve every customer before and after the match.”

Ben McBride, manager of Loca at Dubai Marine Resort and Spa, said several tables had been reserved by yesterday morning.

Loca was a popular venue during the tournament, he said, particularly when the UAE beat Oman 2-0 and then Kuwait 1-0 in the semi-final on Tuesday.

“We had a mixed crowd of about 80 per cent Emiratis and the rest expats and it was a mixture of men and women.”

Mr McBride, who coaches football in his spare time, said he wished more expatriates would follow the local leagues. “It would be great to get kids more involved and attending the games because there is nothing like a live football game,” he said.

“They are aware of the UAE entering the finals through their local friends at school but honestly football is quite segregated with the Emiratis and the expats; the game needs to branch out more.”

One group of expatriates who will certainly be following tomorrow’s game is the Iraqi community. Reyadh Altaie, a martial arts instructor who has lived in the UAE for 34 years, admits he’s been here so long that he’s not entirely sure who to cheer for.

He has planned a gathering at his house to watch the match. “I’m having about 12 friends over: two are Emiratis and 10 are Iraqis, so it’s the opposite of how the stadium will look,” he joked.

Mr Altaie went to school with a number of Al Nasr Club footballers who played for the UAE national team.

The UAE won the Gulf Cup in 2007. Tonight’s match at the Bahrain National Stadium in Riffa kicks off at 8pm.