Erdo?an says will travel to Gaza after Washington visit 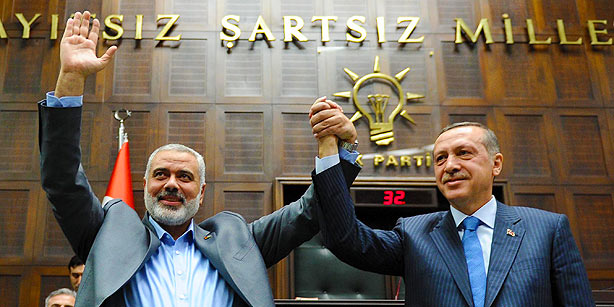 Prime Minister Recep Tayyip Erdo?an has said a long-awaited visit to the Gaza Strip will take place after he travels to Washington, D.C., in mid-May for talks with President Barack Obama.

“I think it will take place after the US visit,” Erdo?an told journalists en route to Kyrgyzstan on Tuesday evening, when he was asked about the planned trip to Gaza. The prime minister had earlier said he planned to visit the Hamas-run territory in April. Erdo?an and Obama are set to meet in Washington on May 16.

The US, which brokered a reconciliation deal between its allies, Turkey and Israel, on Jan. 22 to end their three-year rift, is concerned that Erdo?an’s visit to Gaza could undermine the process of normalization between the two countries. During a visit to ?stanbul on Sunday, US Secretary of State John Kerry pressed for a speedy restoration of diplomatic ties between Turkey and Israel, saying this is critical for a US-backed Israeli-Palestinian peace process as well as regional stability.

Kerry, meanwhile, is expected to pay yet another visit to Turkey in two weeks, this time to attend an international meeting on Syria. Kerry and his Turkish counterpart, Ahmet Davuto?lu, agreed that the meeting, a gathering of an 11-nation core group of the Friends of Syria, should convene soon.

Israel apologized on March 22 to Turkey for a deadly raid on the Mavi Marmara aid ship in 2010, which resulted in the deaths of eight Turks and a Turkish American. The ship was trying to break through the Israeli blockade of Gaza. In a telephone conversation with Erdo?an, which Obama also briefly joined, Israeli Prime Minister Benjamin Netanyahu promised compensation for the families of the dead and those injured during the raid but made no commitment on the lifting of the blockade.

Turkey, however, insists that the blockade should be lifted. In comments after the March 22 apology, an Israeli official insisted that Israel did not commit to ending its Gaza blockade as part of reconciliation with Turkey and could clamp down even harder on the Palestinian enclave if security is threatened.

Prime Minister Erdo?an has said he wants to visit Gaza to monitor the status of the blockade. But with Kerry calling for Turkish participation in the new Israeli-Palestinian peace process, analysts say Erdo?an’s Gaza visit may turn into a welcome development if Erdo?an uses the visit as an opportunity to talk to Hamas about joining peace talks alongside the Palestinian administration led by President Mahmoud Abbas.
Hagel to visit Turkey to revive Turkish-Israeli defense ties

US Defense Secretary Chuck Hagel is also set to visit Turkey later this month and will try to rekindle military cooperation between Turkey and its former close ally Israel in his first visit to the two countries since taking office, a Turkish official was quoted as saying by Reuters on Wednesday.

Hagel, whose visit to Turkey will take place close to his Israel trip set for April 21-23, will also discuss regional issues, the official said. The US Embassy in Ankara said it would not comment on any potential visits.

During his visit, the official said, Hagel would try to encourage both countries to restart military cooperation, which used to include maneuvers and defense contracts. Apart from relations with Israel, the civil war in Syria is likely to feature prominently in discussions.