Erdoğan says out of question Turkish troops will leave Iraq 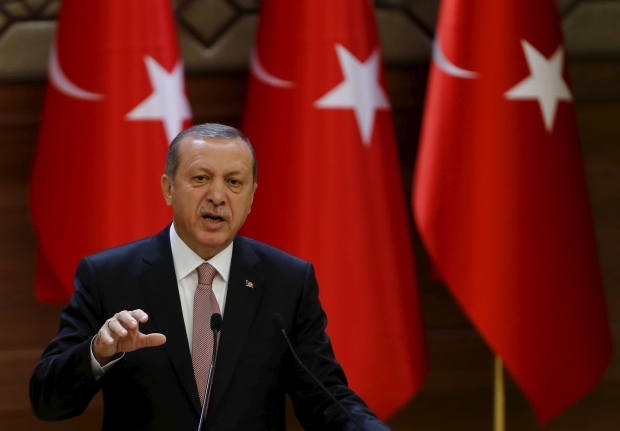 Turkey’s President Recep Tayyip Erdoğan on Thursday said it was out of the question that Turkish troops would withdraw from Iraq after Baghdad accused Ankara of deploying soldiers there without permission.

The row has badly soured relations between the two countries and saw the Turkish ambassador to Iraq summoned on Saturday to demand that Turkey immediately withdraw hundreds of troops deployed in recent days to northern Iraq, near the Islamic State-controlled city of Mosul.

Iraq’s foreign ministry said Turkish forces had entered Iraqi territory without the knowledge of Baghdad, who view their presence as a “hostile act”.
Speaking at a press conference, Erdoğan said that the troops were there for training Kurdish peshmerga fighters and not combat purposes. He also reiterated an earlier statement that they were deployed following an invitation by Iraqi Prime Minister Haider al-Abadi last year.

“The number of our soldiers (in northern Iraq) might increase or decreased depending on the number of peshmerga being trained,” Erdoğan stated. “Withdrawing our soldiers is out of the question for the moment.”

Erdoğan said there would be a trilateral meeting between Turkey, the United States and Kurdish northern Iraqi authorities on Dec. 21 but made no mention of a possible meeting with Baghdad… see more